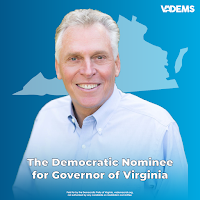 Although Hala Ayala, who won the race for lieutenant governor, is a multi-racial woman of color, she's somewhat notoriously backed by Virginia’s largest electric utility, Dominion Energy, which gave her $100,000 in the closing days of her campaign against the progressive candidate Sam Rasoul.

That slate will be up against a Trump-endorsed Republican team in a test this fall of any lingering penumbra of power associated with the former president. Will progressives turn out?

Posted by J.W. Williamson at 6/09/2021 08:24:00 AM
Email ThisBlogThis!Share to TwitterShare to FacebookShare to Pinterest
Labels: Terry McAuliffe, Virginia-State of

What Democrats, generally, don't seem to realize is that it doesn't make any difference on whether you nominate moderate or more liberal progressive candidates.

This might have worked back in the Bill Clinton years, but we don't live in that world anymore.

All you have to do is look at NC's state-wide and legislative races. The Republican candidates who won invariably painted their opponent as a progressive who was fermenting riots by BLM protestors, helping criminal illegal immigrants get into the country, taking away your guns, and taxing you to death.

It was the same message, no matter whether the candidate was moderate or more liberal, experienced or inexperienced.

The key to winning in NC is going to be difusing the racism and bigotry of the GOP. You're not going to sway anyone by just smiling and portraying yourself as a nice family man/woman who loves education and jobs. You have to address the scare tactics head-on and call them out - project strength and responsibility, not generalized "warmth".