The Wrong Attorney General To Right the Ship 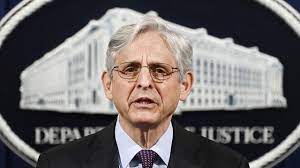 All this on the heels of watching a complete takedown of Garland by Rachel Maddow on Monday, who logically suggested that the failure to prosecute Trump's crimes committed while in office will surely lead to more presidential crimes in the future by another president who notices that Trump got away with it.

Well, just a taste of the Boston Globe editorial while I soak my brain in vinegar (and I'm beginning to understand why Merrick Garland was so acceptable to so many Republican senators -- he's inoffensive to the point of impersonating a doormat):

Norms in a democracy are only as good as our willingness to enforce them.

After the precedent-busting, lawbreaking presidency of Donald Trump, Congress needs to pass new laws to constrain future officeholders. That’s the case the Globe has made in this series: curbs on the pardon power, safeguards against nepotism, broadening the power of Congress to investigate the president, protections for whistle-blowers, requirements that presidents make financial disclosures to root out conflicts of interest.

All of that is crucial to protect Americans against a repeat of the last four years.

But imposing stricter rules on future presidents, by itself, is clearly insufficient. Those presidents also need a clear message, one that will echo through history, that breaking the law in the Oval Office will actually be punished — that ethics policies and legal requirements, both the existing ones and those Congress will hopefully enact in the future, are more than just words on paper.

Trump’s presidency didn’t just expose glaring legal weaknesses: It also made clear that our institutions are incapable of holding presidents accountable for breaking even our existing laws. If Congress had played the role the Founders envisioned, by removing Trump from the presidency after his criminality became clear in the Ukraine affair, that might have been enough of a deterrent to scare future presidents straight. But lawmakers didn’t.

Posted by J.W. Williamson at 6/10/2021 10:04:00 AM
Email ThisBlogThis!Share to TwitterShare to FacebookShare to Pinterest
Labels: Donald Trump, Merrick Garland