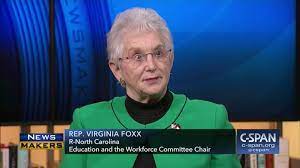 We did a double-take when we discovered this morning that Congresswoman Virginia Foxx actually voted with the (vast) majority of House members to "remove all Confederate statues from public display in the U.S. Capitol, along with replacing the bust of former Chief Justice of the United States Roger Taney, author of the 1857 Dred Scott decision that declared that people of African descent were not U.S. citizens."

In taking that surprising vote, Foxx broke with most other Republicans in the North Carolina delegation. The following members voted to keep the memorials, along with their odor of white supremacy, while decrying "critical race theory" as a threat to their collective smugness:

Did she realize what she was voting on? Perhaps she finally realizes that she is a shoo-in regardless of how she votes. I'm sure the vast majority that voted for her never even see what she votes on or how she votes. All they care is that she has an R by her name, and has the right skin tone.

Good on Virginia. I wish she would surprise us more often.

But her latest constituent email beats the drum of the 'dangers of Critical Race Theory' - which is one of those graduate school courses very few people ever take and nobody else understands. She's talking out of both sides of her mouth...again.