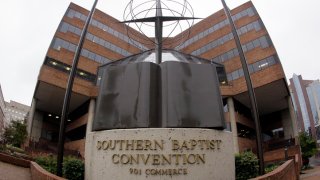 I used to be a Southern Baptist -- graduated from a Southern Baptist college in Texas -- so I paid sad attention when many of its most prominent leaders went ga-ga for Donald Trump, proclaiming that God Hisself sent Trump to save conservative Christianity from secularism and modernism and humanism and Democrats.

How odd for God to choose a lying, self-dealing, inheritor of Nebuchadnezzar's pride and arrogance to save Christianity, let alone the Southern Baptist Church. That would be kind of an impressive miracle in its own right, a twisted miracle.

Right now a rising tide of Trumpist pastors are intending a hostile takeover at the church's convention this coming week in Nashville. Ruth Graham reports: "Like the Trump movement within the Republican Party, a populist groundswell within the already conservative evangelical denomination is trying to install an anti-establishment leader who could wrench the church even further to the right, while opponents contend that the church must broaden its reach to preserve its strength. For three days, thousands of delegates known as 'messengers' — most of them white men — will fight over race, sex and ultimately the future of evangelical power in the United States."

Turns out the church hasn't been Trumpist enough? I'm stunned.

The Trumpist pastors are especially mad about the few -- the very few -- who dared proclaim to their congregations that Black lives matter, and it's like the whole pro-slavery, racist history of the church has been resurrected to do proxy battle for white supremacy. That's what it looks like to me. I have my own history with the church, and I know the lingo. The Trumpists have seized on "critical race theory" (like they seized on other handy words four years ago, like "socialist" and "Marxist") as the demon threatening their hegemony.

Understanding race in America exposes the foundational DNA of this particular brand of fundamentalism, and these Baptists don't relish looking at themselves critically, or honestly. They were a pro-slavery church when they split from Northern Baptists before the Civil War, and I can tell you that the impulse to separate people by race still runs deep among the brethren. Some have tried to repent those views, while some -- like the extremist preachers looking for a coup next week -- ain't repentin' nuttin.

Posted by J.W. Williamson at 6/13/2021 09:56:00 AM
Email ThisBlogThis!Share to TwitterShare to FacebookShare to Pinterest
Labels: religion and politics, Southern Baptists, Trumpism