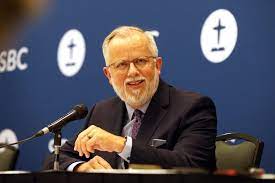 Late yesterday news broke that the Southern Baptist "messengers" at their convention in Nashville had selected Ed Litton as their president, which is considered a defeat for the hard right within the denomination. Litton "narrowly defeated" Mike Stone, the favored candidate of the far right (Litton 52%, Stone 47.81%). Stone actually led Litton in the first round of voting, when there were three candidates.

The Trumpists focused much of their wrath on "critical race theory," an effort by American historians to examine "structural racism," which has been baked so thoroughly into both white civic structures and white habits of mind that it's become essentially invisible to white people conditioned to deny its existence. According to Sarah Pulliam Bailey, some of the far right wore red stickers on their convention badges that read “Stop CRT” and “Beat the Biden Baptists.”

Yes, apparently there are "Biden Baptists." They, and a bigger than usual attendance by young people, put Ed Litton into leadership.

Litton, pastor of First Baptist Church North Mobile in Alabama, pitched himself as someone who would lead the convention toward more racial reconciliation. According to Christianity Today, Litton "has led efforts for pastors in the Deep South to acknowledge and heal from their racist history and joined black pastors ... in opposing 'any movement in the SBC that seeks to distract from racial reconciliation through the gospel and that denies the reality of systemic injustice.' ”

Posted by J.W. Williamson at 6/16/2021 07:30:00 AM
Email ThisBlogThis!Share to TwitterShare to FacebookShare to Pinterest
Labels: religion and politics, Southern Baptists, Trumpism

Don't worry - the Baptists will still have the same racism, bigotry, and homophobia.

They'll just try to be more polite about it.