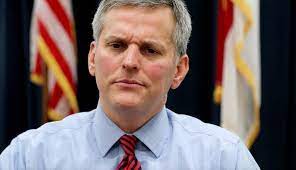 “Juul sparked and spread a disease, the disease of nicotine addiction. They did it to teenagers across North Carolina and this country, simply to make money. Their greed is not only reprehensible, it is unlawful and that is why I took action.”

Josh Stein announced a legal settlement yesterday whereby the vaping giant Juul will pay $40 million to the state of North Carolina for the addiction it delivered to hundreds -- thousands -- of the state's teenagers. Juul settled to avoid an even bigger judgment of $80 million against it.

Stein was the first attorney general in the country to bring a civil action against Juul. Now many other attorneys general are following his lead.

Stein also sent a letter Monday to the Acting Commissioner for the Food and Drug Administration Janet Woodcock asking the agency to act to curb the sale of e-cigarette products and to prohibit all non-tobacco e-cigarette flavors — including menthol — to limit nicotine in the products and to impose marketing restrictions nationwide.
Virginia Bridges provides some context:

Concerns about youth e-cigarette use followed Juul’s launch of its namesake e-cigarette in 2015 with a splashy social media campaign that utilized high-profile influencers to help spread word about the new product. Juul wasn’t the first e-cigarette company, but it’s campaign, sleek devices and flavored e-juices vaulted e-cigarette use, experts said.

In the weeks following Juul’s launch, some health officials started to worry about the campaign for the unregulated products.

Serious concerns began mounting in 2017 after the National Youth Tobacco Survey showed an increase in youth e-cigarette use, said Matthew Myers, president of the national group Campaign for Tobacco-Free Kids.

Posted by J.W. Williamson at 6/29/2021 08:51:00 AM
Email ThisBlogThis!Share to TwitterShare to FacebookShare to Pinterest
Labels: Josh Stein, tobacco