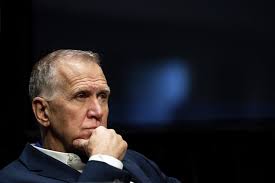 No one ever accused Sen. Thom Tillis of thinking original thoughts. He's more of a bandwagon sort of guy, and he'll jump on a brightly lit one if it's moving slowly enough and if there's already plenty of other Republicans riding it. So on Monday this week, Senator Thom Tillis pledged his allegiance to the conservative panic about "critical race theory" (CRT), joining such Republican luminaries as Sen. Tom Cotton, Sen. Marsha Blackburn, and Sen. Mitch McConnell in PRing a bill that would somehow prohibit the use of any federal funds to teach the 1619 Project -- "by K-12 schools or school districts" -- an astonishing mandate since the 1619 Project is already free to everyone on-line.

The Tillis announcement (CRT-bashing being catnip to rally-goers) signals to me that the senator is still trying to cement it with the Trump wing, which has never trusted him. CRT-fear is the perfect message for low-information rural people, partly because nobody knows what critical race theory is, but hey! anything going racial has usually proved dangerous. For Tillis, this is his own Trump-holding-the-Bible-in-front-of-the-church moment. Upholding the Gospel that "history" for American students should be reaffirmations of American white virtue, pious recitations of the democratic virtues contained in the preambles of certain sacred American documents, like the Declaration of Independence. Meanwhile, glide past the whole legacy of slavery as national policy. By signing on to the anti-CRT bill, Tillis is virtue-signaling to a crowd that wants to take no prisoners and has a Caesar in exile to whom they bow. Tillis is also and incidentally confirming the Republican Party's continued contraction into something small, "The White Peoples Party."

Tillis's constituents possibly don't even understand what "critical race theory" is. That becomes clear reading through some of the complaints that our Lt. Gov. Mark Robinson solicited from a kind of parent hot-line for reporting examples of liberal classroom indoctrination. The examples that Jeffrey Billman published (the product of a contentious public records request) show that "CRT" is a convenient portmanteau suitable for packing in everything that conservatives don't like about the contemporary world, like anything related to LGBTQ, like any mention of "Black Lives Matter," like any classroom example of liberalspeak that some kid exaggerates as he reports it to his shocked parents.

I grew up in the thoroughly unwoke 1950s in a section of the Texas Panhandle that had been settled after 1890 by white refugees from the Kingdom of Cotton. Lot of struggling rural people moved to that section because the state of Texas was offering essentially free farmland -- amazingly deep and fertile dirt currently covered by grass -- free to anyone willing to take it up and make it productive and build a structure to signal permanence. Why, here's you a plot of land if you're tough enough to tame it, and tough people came from Alabama (especially Alabama) and from Mississippi and from Georgia and from North Carolina (where my own forebears joined the wave). The resulting culture was about as all-white as you ever get, or could get back then, and super sure of its own virtue.

The color crisis in my little rural county came with the arrival of Hispanic farm workers, starting in the 1950s and accelerating in the 1960s and keeping pace through to this very day. Subsistence whites, my people, resented the "Mess-kins." I know. I sat in rooms and heard the talk. And I remember fights in the schoolyard between tough white boys and tough Mexican kids, bloody-nose extravaganzas. Assumptions among those white-like-me hardened: the world was made by white people, for white people, and who the ever-living hell do you think you are challenging that?

When I first came to Appalachian State University in 1970, there was actually a senior professor in the history department quite notorious for telling her students that really, slaves were better off before the Civil War, and basically they were relieved to be taken care of. That was not necessarily a shocking opinion at the time, at least in the South, and there was never an uprising among students about such talk. Now there would be. Now our understanding of history is capable of complex thinking.

Bottomline: Tillis is one of the genetic beads on our Southern double-helix, with his playing to the white conservative preference for shows of force, if triggered by violations of an iron racial hierarchy. Tillis stands for a power structure capable of many innovations. But the only question remains: Is that bead of Southern DNA always gonna be dominant or can we evolve?

Posted by J.W. Williamson at 6/17/2021 10:37:00 AM
Email ThisBlogThis!Share to TwitterShare to FacebookShare to Pinterest
Labels: Texas, Thom Tillis, Trumpism