A Reoccurring Feature On Who's Jumping Off Luxury Liner Trump 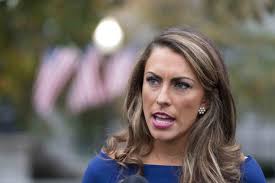 Farah’s departure, with little over a month remaining in President Trump’s administration, amounts to a tacit acknowledgment that — despite his baseless and dangerous claims to the contrary — Trump lost the 2020 election, and much of his team is now pondering their post-White House future.
Posted by J.W. Williamson at 12/04/2020 12:11:00 PM
Email ThisBlogThis!Share to TwitterShare to FacebookShare to Pinterest
Labels: Alyssa Farah, Donald Trump