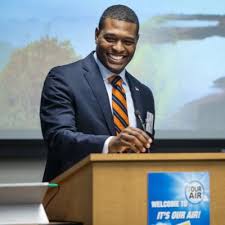 Regan, 44, has served as North Carolina’s top environmental official, leading the Department of Environmental Quality (DEQ), since early 2017, appointed by Gov. Cooper. I can't do better than Jeffrey Billman (and his daily PRIMER/North Carolina newsletter), who characterized Regan and the task ahead of him in Washington:

DEQ Secretary Michael Regan wasn’t Joe Biden’s first choice to run the EPA—that was California’s Mary D. Nichols, who was felled by a progressive rebellion for being insufficiently attuned to environmental racism. But he checks a lot of the right boxes.

The Trump administration’s EPA, run by a coal lobbyist—seriously!—is a hot mess of piss-poor morale, science denial, and special interest capture. That’s not unlike the polluter-coddling DEQ that Regan inherited from the McCrory administration in 2017 and turned around. He also had to contend with an anti-science Republican legislature, which might also be familiar terrain.

He’s overseen Cooper’s plans for carbon reductions and made climate change a priority, both things he’ll also have to do under the Biden administration. He also forced Duke Energy into a multibillion-dollar coal-ash settlement. That settlement was central to Biden’s decision, McClatchy reports.

Soon after becoming secretary, Regan created an environmental justice advisory board, a helpful contrast with Nichols. He developed asthma growing up in eastern North Carolina, which—as Naeema Muhammad of the North Carolina Environmental Justice Network put it—is a “dumping ground” for “anything white people don’t want in their backyard.”

Incidentally, you can sign up for the daily PRIMER here.

According to the WashPost, “[Regan] was very tough on Duke,” quoting a former utility executive, who spoke on the condition of anonymity to protect his business relationships.

Also from the WashPost:

In another high-profile case under Regan, North Carolina ordered the chemical company Chemours to virtually eliminate per- and polyfluoroalkyl substances (PFAS), a group of man-made chemicals, from seeping into the Cape Fear River. The chemicals — used in cookware, stain repellent and several other products — have been linked to deleterious health effects, including low infant birth weights, immune system problems, thyroid hormone disruption and, in some cases, cancer.

“We have concerns about how DEQ as an agency has failed to address PFAS issues in the Haw River watershed under his leadership,” Emily Sutton, the Haw Riverkeeper, said in an email. “But Regan has done what he could with little support from the governor or the legislature.”

A native of Goldsboro, Regan earned his undergraduate degree in earth and environmental science at NC A&T University and a master’s degree in public administration from George Washington University.

Deb Haaland, to be Secretary of the Interior 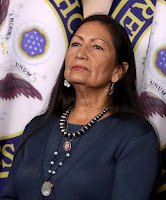 [Plucked from the NYTimes] If confirmed by the Senate, Haaland (who was just reelected to a second term in Congress from New Mexico) would be the first Native American to lead a cabinet-level agency. She would oversee a sprawling department responsible for some 500 million acres of public lands, including national parks, oil and gas drilling sites and endangered species habitat.

Haaland, a citizen of Laguna Pueblo, one of the country’s 574 federally recognized tribes, would helm the federal agency most responsible for the well-being of the nation’s 1.9 million Indigenous people. Among other things, the Interior Department runs the Bureau of Indian Education and the Bureau of Trust Funds Administration, which manages the financial assets of American Indians held in trust.

For generations, Native Americans have fought the department’s policies and demanded a greater voice in its operation. In one instance, in 1972, about 500 activists took over the department’s headquarters in Washington, D.C., protesting living standards and broken treaties.

The name Haaland comes from her Norwegian-American father, who married her native American mother. Both parents were veterans of the Armed Forces during World War II.

Still trying to get the word out about the new watauga conservative website. The thieves of the old site refuse to approve comments letting people know the new address and only two of the old commenters have found the new blog. Thank you for being understanding.

I may disagree with what you say, but will fight to the death for your right to say it.