Donald Trump, Evermore -- We Can't Fish This Turd Out of the Punchbowl 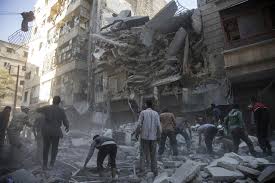 We'll never be rid of him. Even after he leaves 1600 Penn Ave., he won't be gone. His great talent for wreckage will outlive the age. Also his ability to awaken in resentful people a bitter rage against those who he tells them are responsible for most injustices. His showmanship for those resentful people, taking a giant dump on every standard of our social contract, while defying the law mostly to enrich himself, has made him wildly popular with tens of millions of voters. Weird, right? But not really. Applauded by resentful people who are under blinding economic stress, often hopeless, to the point they're willing, even eager, to burn the whole place down. Or blow it the hell up! Just the sledgehammer alone that Trump took to every Obama program -- he made Washington psychically like a street in Aleppo that Syrian President Assad had gotten Putin to bomb the living shit out of. But his followers pick their way through the debris without even noticing it's there, or giving a good goddamn if they do see it.

Now, after January 20th, with Trump gone but ever a spectacle of heroic defiance against the deep-state actors who stole the election from him, the whole notion of constitutional government in the liberal/progressive tradition will still hang in the balance. Biden won't have the Senate (unless lightning strikes twice in Georgia a month from today). He'll have McConnell. Plus he'll have Amy Coney Barrett on the Supreme Court. Trump says he'll run again in 2024, and that will keep Republican congressmen in line to throw clods at Trump enemies and refuse bipartisanship. Talk radio will glow like radium. And just the mere threat of Trump's running for president in 2024 will keep credible, moderate, sane Republicans out of the race. (Marco Rubio, I'm looking at you, and almost -- almost! -- shedding a tear.) Regression and racism will still shake the body politique.

Worse, from my rural North Carolina perspective, for the next four years, Trump will keep rural Republicans particularly juiced, waiting for The Second Coming, voting in the meantime against all Democrats for the sake of saving Christianity for the sake of saving America. In many Republican counties and districts, won't matter the two-headed Republican candidate. The more he horrifies the liberals the better. In other words, IMO it's going to be a brutal midterm in 2022 for Democrats, especially in the more rural and exurban congressional districts everywhere.

Try as I might, I can't see any other conclusion from the elections in North Carolina that doesn't spell a pretty disappointing outcome, not quite a disaster, since we still have governor and attorney general and veto-sustaining numbers in both House and Senate, but the failure of my blue wave to take either House or Senate in North Carolina or the US Senate either, and the loss of several good souls from the General Assembly and the loss of Cheri Beasley at the Supreme Court, these defeats leave me numb.

Twitterman's tens of millions of followers/adherents/street-fighters, who really can't tell a hawk from a handsaw and who now don't believe in an inclusive Republic nor in most of its standards and traditions, will not want to participate in any rebuilding better of what has been demolished. And they'll have the numbers to roll over any progressive Democrat.