Xavier Becerra, to lead the Department of Health and Human Services (HHS) 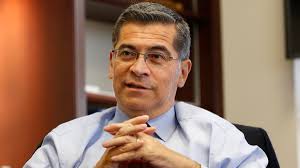 A critical position in coalescing the Biden's administration fight against the coronavirus pandemic, HHS is one of the government’s largest departments, with several agencies within it that are crucial to the federal response to the pandemic, including the Centers for Disease Control and Prevention (CDC), the Food and Drug Administration, the National Institutes of Health, and the Centers for Medicare and Medicaid Services.

Becerra is currently California Attorney General. He was originally appointed to that job when Kamala Harris won a seat in the Senate. Becerra was subsequently reelected in his own right. Before becoming California A.G., Becerra was a 24-year member of Congress.

It is said that Becerra has an unorthodox background for HHS secretary -- some were hoping that Biden would choose a doctor or someone with medical training -- but one Biden insider said "the president-elect chose him because he regarded the attorney general of the country’s most populous state as someone who has used that platform and earlier roles to expand access to health care." [WashPost]

During Trump's four years, Becerra has been among the most outspoken state attorneys general, leading coalitions of Democratic colleagues in challenges to the current administration’s policies on immigration, the environment and health care, suing the federal government more than 100 times since taking office.

Rochelle Walensky, to become director of the Centers for Disease Control and Prevention (CDC)

Walensky, chief of the Division of Infectious Diseases at Massachusetts General Hospital, is also a professor of medicine at Harvard Medical School. She is well-respected for her work, including on the comparative effectiveness of treatment for HIV and AIDs.

Walensky received a B.A. from Washington University in St. Louis in 1991. She earned her M.D. from the Johns Hopkins School of Medicine in 1995, and then trained in internal medicine at Johns Hopkins Hospital until 1998. She then participated in the Massachusetts General Hospital/Brigham and Women's Hospital Infectious Diseases Fellowship Program, earning an M.P.H. from the Harvard School of Public Health in 2001.

On the theory of "herd immunity, she has said, "[The idea] is predicated on the idea that you know who is going to get sick and you can somehow isolate and protect them, but there is absolutely no evidence that we can do this .... No-one is suggesting that lockdowns should be the default position. They are a last resort. But if we just let the virus run free without mitigation strategies, such as masking, our hospitals will overflow and that would mean we would no longer be able to take care of the population's health across the board."