Cravings Can Get You Killed 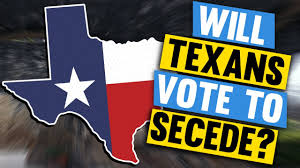 The Attorney General of Texas, using the cloak of his office and in effect representing all the citizens of that state of my birth, sued four other sovereign states for their election methods and results. Ken Paxton's suit went directly to the Supreme Court, and was joined by the attorney generals of 17 other states and by 126 Republican members of Congress. They were all convinced -- or said they were convinced, in order to impress their impressionable constituents -- that the election was stolen from Donald Trump.

After The Supremes threw out Paxton's suit as a piece of ridiculous garbage, the mayor of a small Texas town near Lubbock, which is very near where I grew up in the Panhandle, announced that he was ready to go to war and so were the dozens of other members of the South Plains Patriots, an armed militia pledged to defend Trump's right to stay in the White House. That mayor said there’s “no way in hell” Biden won fairly. The only way he’ll believe it, he said, is if Trump himself says so. “Trump is the only one we’ve been able to trust for the last four years. As far as the civil war goes, I don’t think it’s off the table.”

That mayor -- need we say it? -- was speaking for God knows how many other Trumpists everywhere who have swallowed Trump's bullshit like it was a chicken-fried steak dinner with yeast rolls. I tend to believe their stated willingness to use ordinance against enemies of the state. But who would they march against first, especially in a state as large as Texas with Republican elected officials in every statewide office? Or would they go all the way to Michigan, one of Paxton's targets, and storm Gov. Gretchen Whitmer's home? Not sure what that would gain them. So maybe they mean to coagulate on the streets of Washington, D.C., like the Proud Boys did last weekend. The Proud Boys showed them how to do it, although with fists rather than guns -- fists and (oh yeah!) knives. They managed not to kill anyone in the Capitol, but perhaps it's only a matter of time. And they didn't nullify the election.

Maybe Trump imagines himself refusing to come out of the White House on January 20th, with hundreds of his armed supporters guarding the doors and the grounds against any attempt by Federal marshals to haul his ass out. It's a fantasy narrative worthy of Hollywood. Maybe the armed militias who are itching to pull triggers on something have that fantasy too. Some have visions of their own heroic masculinity. Remember the good old boy from Salisbury who stormed a pizzeria in Washington looking for the kidnapped children? He had a fantasy that he was a savior working for the Lord.

I both believe that mayor in Texas, and I don't. I grew up with guys like him. Our school yard sprouted bullies like our irrigated farmland sprouted cotton. Some of them loved shoving around smaller kids, more timid kids, girly kids, but punch one in the nose, he'd back off quick, cupping the blood in his hand and running for the school nurse. Granted, some of them would never back off. They had too much invested in the presentation. School yard fighting was a performance, after all, and the method actors of Texas toughness always had cheering sections of other guys who enjoyed the break from school boredom.

I doubt the prospect of armed rebellion (though if Trump actually called for his supporters to take up arms against the "deep state," Katie bar the door!). Secession is another matter. Now while a part of me wants to say so long, goodbye, don't let the door hit ya to those new secessionist-talking braggarts in Texas and elsewhere, there's no way that's happening either. Not that it matters really, but the Supreme Court in 1869 actually ruled (in Texas v. White) that secession was not only unconstitutional but also a fictional delusion. The guys like the South Plains Patriots don't know nuttin' 'bout no Supreme Court ruling and wouldn't care if they did, so they might try to stir it up. But carrying out even a fictional secession would be a mighty heavy lift, what with interstate commerce and all.

I still worry. Even without the extremes of Civil War and secession, there's every likelihood that the snipers among Trump's most devoted followers will eventually satisfy their craving to shed some blood.

Posted by J.W. Williamson at 12/22/2020 10:42:00 AM
Email ThisBlogThis!Share to TwitterShare to FacebookShare to Pinterest
Labels: Donald Trump, militia movement, Texas