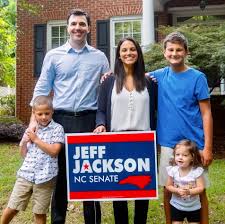 NC Senate Democrat Jeff Jackson just announced in an email that he and his family are considering the potential for his running for the US Senate in 2022.

He'll be a strong candidate. He'll be able to raise the money. He'll have enthusiastic support in Watauga County.

He was just reelected to the NC Senate from a district in Mecklenburg County and has been something of a rising Democratic star in the General Assembly. Here's part of the email he sent:

So here’s what I’m going to do:

Marisa and I will talk about it with our kids over the holiday.

(Avery is also in the middle of potty training, and folks I can assure you that no one in this family is running for U.S. Senate until that essential task is complete.)

Marisa and I genuinely appreciate all of the support we’ve received in the last few weeks. We’ll update you after our family talks it over.

Posted by J.W. Williamson at 12/08/2020 11:00:00 AM
Email ThisBlogThis!Share to TwitterShare to FacebookShare to Pinterest
Labels: Jeff Jackson