Miguel Cardona, to lead the Department of Education 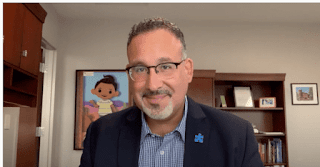 Cardona's parents are from Puerto Rico. He grew up in public housing and attended public schools throughout his life, a decided contrast to outgoing education secretary Betsy DeVos, a billionaire champion of private schools which both she and her children attended.

Cardona, 45, was appointed Connecticut’s first Latino commissioner of education in 2019 after two decades of experience as a public school educator, starting in a Meriden, Conn., elementary school classroom. He also served as a principal for a decade, among the youngest in the state, and as an assistant superintendent in Meriden. He was also an adjunct professor at the University of Connecticut, where he received his doctorate.

As Connecticut's top education official, Cardona has leaned in on the side of reopening schools during the COVID crisis, leaned in without ordering it after the Connecticut state school board voted to keep schools closed and go to virtual teaching only. Cardona worried about the poorest and most vulnerable students who either did not have all the infrastructure for vitual learning or who needed more one-on-one instruction.

According to the NYTimes, "If confirmed, Dr. Cardona would face the most urgent education crisis in decades, and whether he can press schools to reopen without turning the issue into a partisan matter, as Education Secretary Betsy DeVos did, could have major repercussions for the young Biden administration."