Biden To Name His Pick To Head DOD

Gen. Lloyd J. Austin III, to be secretary of defense

Borrowed from the WashPost 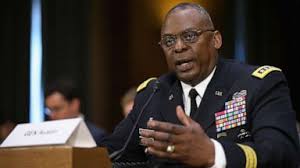 Lloyd Austin, 67, rose to become a four-star general in the Army and retired in 2016 as the chief of U.S. Central Command, a role from which he oversaw U.S. military operations across the Middle East for three years. His tenure there included the rise of the Islamic State, which began seizing cities in Iraq in 2014, and the U.S.-led military intervention to stop it.

Austin’s selection will prompt a congressional debate over whether enough lawmakers would support a waiver from a law that mandates any service member must be out of uniform for at least seven years before being eligible to serve as defense secretary. The law is meant to ensure civilian control of the military.

The Trump administration obtained a similar waiver for former defense secretary Jim Mattis, a retired Marine Corps general, but it came at a time when many Republicans had taken themselves out of the running for the job by openly criticizing President Trump when he was a presidential candidate.

Biden has had a personal relationship with Austin and even attended the general’s 2010 change-of-command ceremony when Austin took over in Iraq. Biden, whose portfolio as vice president included Iraq, worked with him closely during the Obama administration.

Austin oversaw not only the Islamic State operations but also the withdrawal of U.S. operations in Iraq — a massive logistical undertaking that could be significant as the country endeavors to distribute a coronavirus vaccine, according to the person who requested anonymity to discuss internal deliberations.