Marcia L. Fudge, to head the Department of Housing and Urban Development (HUD) 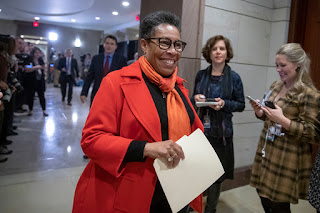 Fudge has been in Congress since 2008 representing the Ohio 11th. She was first appointed to the seat to finish out the term of the previous congresswoman, who died in office. Fudge has served in the past as chair of the Congressional Black Caucus.

She's a native of Cleveland and a graduate of the renown Shaker Heights High School. She has both a degree from Ohio State University and a J.D. from Cleveland State University. Fudge was the mayor of Warrensville Heights, a middle-class and mostly African American suburb of Cleveland, from January 2000 until November 18, 2008. Her 1999 campaign was her first run for any elected office. She was the town's first female and first African American to hold the mayorship.

According to the WashPost, "The next HUD secretary is expected to reverse policies under Trump administration secretary Ben Carson that have eviscerated Obama-era fair-housing protections and enforcement, protections for transgender homeless people, and legal standards meant to keep lenders, landlords and insurers from discriminating."

Tom Vilsack, to head the Department of Agriculture 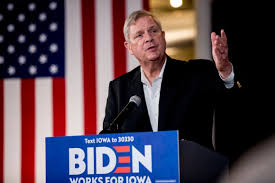 Former Iowa governor Tom Vilsack as agriculture secretary would return him to a job he held during the Obama administration. According to the WashPost, "Vilsack’s planned nomination followed efforts by Black allies of Biden to derail the former governor. Some civil rights leaders had initially backed Fudge, a member of the House Agriculture Committee, for that job in hopes that she would transform the agency into one with more focus on farmworkers, food production and alleviating hunger."

"Some Black officials had objected to Vilsack having a role in the incoming administration because of his 2010 firing of Shirley Sherrod, an African American who was Georgia state director of rural development for the Agriculture Department, after a conservative news website posted selected excerpts from a speech she made that appeared to be racist. The full text of her speech made it clear her remarks had been taken out of context and she was offered another federal job.

"Biden and Vilsack share some political instincts. After Hillary Clinton lost her 2016 White House bid, Vilsack pitched Biden on his view that Democrats could not be a relevant political party if they kept losing rural areas by large margins. His argument was that Democrats need to spend more time in less populated centers and craft a message that appeals to them."