Is Trump's Mythology Stronger than Our Mythology?

Researchers into human evolution speculate on what drove small bands of hunter-gatherer Homo sapiens in east Africa to suddenly leave home about 70,000 years ago and move into the Middle East and then Asia and then Europe and then everywhere else including Siberia, Alaska, and the whole continents of North and South America all the way down to Tierra del Fuego.

Since there were at least five other Homo species co-existing with sapiens during many of the last 70,000 years of species expansion, it seems significant that those five other species didn't also expand, but rather shrank. They disappeared from the earth. Many scientists believe they had help, that they were actively wiped out, like the Neanderthals. Why? Historians of evolution speculate that sapiens had an "intellectual revolution" about 70,000 years ago, more like a sudden mutation in our genes -- caused by what? dunno? -- that taught us to trust others and cooperate on hunts. We could bring down and butcher mammoths. Cooperation led to power -- management, call it -- and just incidentally to wall paintings and little carved idols, which show something even greater (at least to me it's greater): the invention of fiction. 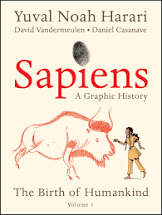 The minute sapiens developed the cranial capacity to create gods and elevate heroes and remember history, the other species of Homo were doomed (especially Homo neanderthalensis and Homo denisova).

**Okay, I'll come clean: I've been reading Sapiens: A Graphic History -- The Birth of Humankind by Israeli historian Yuval Noah Harari (thank you, Mary), and because it's essentially a comic book on evolution and on the artifacts of our coming, I'm learning stuff that I've heard about and never paid attention to, and I'm delighted. Best book of 2020.

I've fastened on that fiction-making ability, the mental circuitry to allow thinking up of religion, turning history into mythology, like turning pottery out of clay. The beliefs that possessed them, that's what made sapiens the conquerors. Still today, the stronger mythology always (usually?) wins.

Right now by the last poll I saw, only 23% of registered Republican voters believe that Biden is the legitimate president-elect. Many will assert that the entire 2020 election is a giant swindle on the American people. You simply cannot maintain a Republic when that many citizens oppose it. They fear -- fear that's actually blossomed into a dangerous paranoia in some -- fear that unchristian forces will take over, will seize their guns, will make them sit beside men praying on rugs, or eat kale. They have angry minds. Even better, they see their enemies. They live next door, the ones who stole the election from Trump and are leading the country to hell.

Meanwhile, our own mythology about the civic contract grows puny. Our negative reaction to Trump and to Trumpism will not sustain us as a belief potent enough to turn aside their paranoia. At least, I fear it won't. My own fear is more exhausting, has less sinew than theirs. 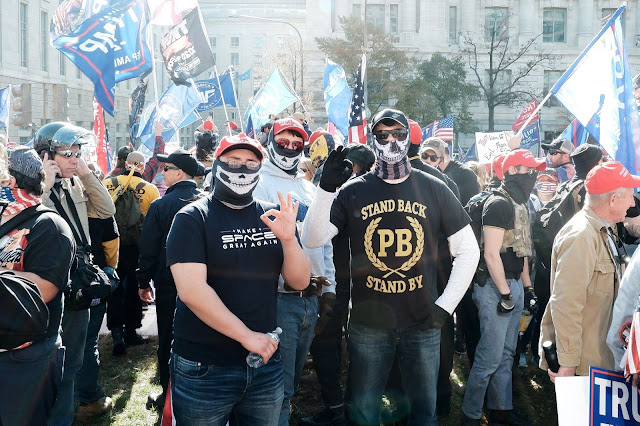 Posted by J.W. Williamson at 12/13/2020 11:23:00 AM
Email ThisBlogThis!Share to TwitterShare to FacebookShare to Pinterest
Labels: Donald Trump, evolution, Joe Biden