Oh Carolina! You make us so proud! You've been en-chant-ed and are rising magically into the Carolina Blue skies, like avatars.

But set those people aside. They know not how they're being used. Look instead at others who were in that room and who understand exactly what's going on, and who know how they're personally being manipulated into good little dogs, and who hope to profit from it by-and-by.

Like Senator Thom Tillis. He was there. Slightly before the rally began he bragged on Twitter that he's the "NC Honorary State Chair" for the Donald Trump reelection campaign, fulsomely welcoming the president to his state, and he tweeted a string of in-arena photos during the rally, gushing about what a great crowd it was. Afterward, he tweeted a photo taken from Marine One as he accompanied Trump back to DC. Him and Trump -- see, they're tight. You do see that, right? 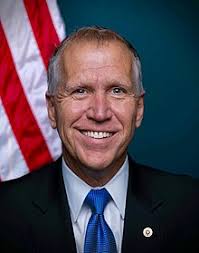 When Trump did the obligatory stage introduction of Tillis on Wednesday night, there were some boos in the audience. That's become a thing, hasn't it? Republicans booing Tillis. Didn't it happen at the GOP state convention earlier this year. They don't like him because they think he's phony. Which he is.

When asked later about the chanting, Tillis defended the president and essentially threw that booing audience under the bus. “Any one of y’all that have been to a rock concert or other venues, somebody starts up, somebody else thinks . . . I mean, to be fair to the audience, they’re in a mode where they’re energized,” said Tillis. They were being idiots, in other words, like people at a rock concert -- said the man voted least likely to be seen at a rock concert.

Tillis sold his soul for Trump's approval, and he's got to own it now.

Rep. Mark Walker of the 6th Congressional District was also at the rally. He's a reverend. He says he "struggled" personally with that "Send her back!" chant, but thank the Good Lord! He wrestled and overcame the adversity of personal doubts to continue to kowtow to his president.

Dan Bishop, running for the House in the 9th District special election, was not only there. He got to speak at the podium. He stoked Twitterman's ego like a pro, evoked "crooked Hillary" (no kidding!), and pointed out that his Democratic opponent Dan McCready took money from Ilhan Omar (boo! boo! boo!).

Dan Forest was there too, the theocrat running for governor, and he got an approving shout-out from Trump. Wonder how NC House Rep. Holly Grange from Wilmington feels about that, since she announced the day after the ECU Trump rally that she was running in the Republican primary against Forest, and she came out of the gate with a launch video that proudly shows her with Donald Trump (why, did you know she "led the Pledge of Allegiance" twice for the president? -- What personal heroism!) and signs off with her declaring she's "a law-and-order, Trump-supporting conservative."

Interesting, since her reputation in Raleigh is more of a "moderate" Republican, whatever that means in 2019.

Someone said on Wednesday night that they saw Holly Grange at the Trump rally (trying to get near the stage?). I don't know if she was there, but after Trump's public embrace of Dan Forest, the propaganda expressed in the video above might be labeled extremely bad timing.

It's the Great Orange Party now. There's no other option for any of the GOPers but to suck up to the Dear Leader.