Oh Dan Forest, You're So Predictable 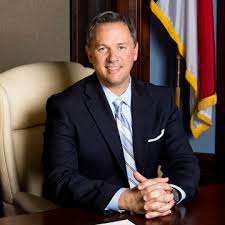 A week ago yesterday, Lt. Gov. Dan Forest, who wants Roy Cooper's job, preached a sermon in Salisbury that's been the talk of the town. The gist: A Christian nation can't be multi-cultural, and diversity is the enemy of the people.

The man is as up-tight as the clasp on Miss Murdstone's coin purse. To listen to him preach -- and when is he not preaching? -- you can't help recalling H.L. Mencken's definition of puritanism: “The haunting fear that someone, somewhere, may be happy.”

Forest spouts absolutist, theocratic fantasies all the time. In January of this year, he was telling students at Wilson Christian Academy:


“America was founded on basic founding principles that all focus back to God and the foundation of our country is established on God’s truths and absolute truths being what it is about,” Forest said. “So we live in a culture today that is about relative truth. People say ‘Well, that ain’t true for you, but it’s not true for me.’ Or ‘That absolutely can’t be true for everybody all the time, so it must not be true at all.’ Reality is that there is such a thing as absolute truth and it is important to know.”

Tell that to Donald Trump, will you? and report back.

Forest was behind the formation of a non-profit, which registered as "The Faith-Driver Consumer" with the state's Secretary of State in 2011, that rated the apparent "Christianity" of many public businesses, especially for Christmas shoppers. Sear's got downgraded because it features women wearing lingerie. No, really.

This theocrat wants to be the next governor of North Carolina. We should be so unlucky!

Posted by J.W. Williamson at 7/01/2019 07:45:00 AM
Email ThisBlogThis!Share to TwitterShare to FacebookShare to Pinterest
Labels: Dan Forest, religion and politics