Look Who's Running for Congress in Texas 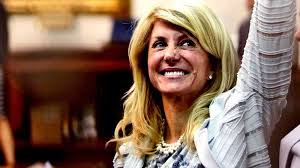 Wendy Davis got nationally well known for double-digit hours in 2013 spent filibustering a Texas abortion bill. Texans know how to do extreme, and Wendy Davis was up for fighting them. She was a member of the Texas Senate representing District 10 (Tarrant County, i.e., Fort Worth), in her second term, and she was what Texas men traditionally label "a handful." She became an instant media star in her pink running shoes.

She opted not to run for her Senate seat again in 2014 and instead went after the governorship against Republican Greg Abbott (who's currently still in that office), and that project turned out to have been unwise, because she did very poorly, losing to Abbott by 960,952 votes. Plus she earned much criticism for running a desperation TV ad that made politics out of the wheelchair to which Abbott is permanently confined. Ouch.

She lives now in Austin where she started a non-profit, Deeds Not Words, and she's just announced a bid for Congress in the 21st House District. The 21st is a fantastic extrusion of fine-grained gerrymandering. It begins in Austin, takes in neighborhoods on the south and southwest sides of town, then runs south along the western side of Interstate 35 into San Antonio's northern neighborhoods and into Alamo Heights. It then juts out west into the Hill Country, taking in Fredericksburg and Kerrville. The district includes Bandera, Blanco, Gillespie, Kendall, Kerr, and Real counties as well as areas of Bexar, Comal, Hays, and Travis counties. The most recent updated Cook Political Report rates it "lean Republican." It used to be Lyndon Baines Johnson's seat of power.

Davis is high-profile, and she can raise money the way a dust devil raises dust. She's going up against a first-term Republican in Chip Roy, who's made himself a Washington pariah in just a year-and-a-half. In May Roy single-handedly blocked $19 billion in disaster aid (much of which would have come to Texas). He was carrying water for Twitterman who was mad because the disaster aid bill didn't include money to build more wall at the U.S.-Mexico border. "The spending bill ultimately passed, but not before Roy's delay frustrated lawmakers on both sides" (Paul J. Weber).

If she's going to win this district, Davis is going to have to do at least passably well in those hill-country counties where the population is sparser and the opinions run strongly to the right. Don't know if this cosmopolitan star is going to shine as brightly out there to the west. That's ranching country.