You wanna see the new Democratic determination to change things in Raleigh? Look no further than Brian Caskey of Mills River in Henderson County. He's been an announced candidate for the NC Senate since February of this year, and he's built out an impressive Facebook feed and website that display a full-blown and serious campaign.


"You know you’re pushing the right buttons when you link Duke Energy to corruption and immediately get a letter from them. I added the part in the middle to show how much they gave [Republican incumbent Senator] Chuck Edwards last year." 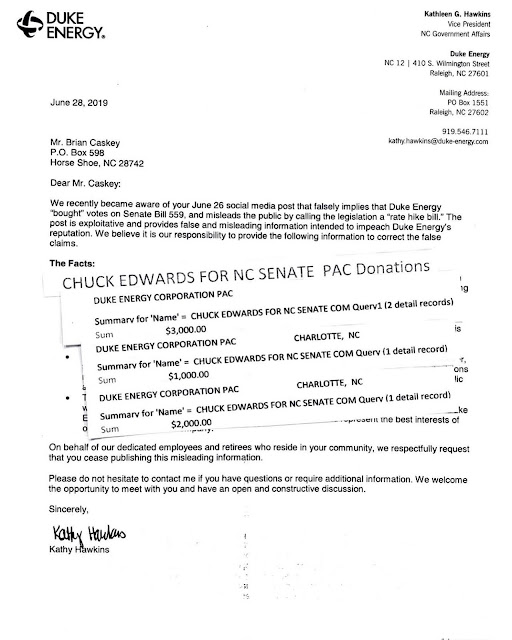 Caskey looks like a scrapper, and we like that in a Democrat. He's an elected member of the Mills River town council, and he introduced the resolution to support the ratification of the Equal Rights Amendment in North Carolina. "I am determined that my daughters will have a level playing field, and that they will know that they are equal to men in the classroom as well as in the work environment."

Meanwhile, the incumbent Republican Chuck Edwards looks like a tool (and not just with reference to the Duke Energy campaign contributions). As co-chair of the Senate Commerce and Insurance Committee, Edwards helped kill (just yesterday!) a House bill that would have banned the use of handheld cellphones while driving.

A few days ago while Edwards was chairing the Senate Commerce Committee, the bill to allow alcohol sales in shopping malls statewide came up for consideration, and interestingly (in light of the many Republican teetotalers in Edwards' district), he pushed the bill forward despite the committee's majority vote against it. According to Lauren Horsch, "A voice vote on the bill was divided, with seemingly more “no” votes than “aye” votes, but Chairman Chuck Edwards, R-Henderson, ruled in favor of supporters and moved the bill forward. There are no recorded or roll call votes in state Senate committees."

Edwards was appointed to the Senate late in 2016 to replace the retiring Tom Apodaca, then won on his own in November 2016, and ran for reelection in 2018 and got 56% of the vote. That frankly looks like a soft percentage for a Republican in that district, but it's still an uphill haul for Caskey. We'll be watching how he pulls that load and wishing him the best.

A great little follow-up to this story is that our family "mysteriously" had a week-long power failure a few days after this article ran. No one else in the community lost power, but the Duke serviceman told Brian, "it looks like someone loosened all of your wires." Hmmm. www.briancaskey.com