Is Mack Paul Considering Another Run for NC Senate in District 18? 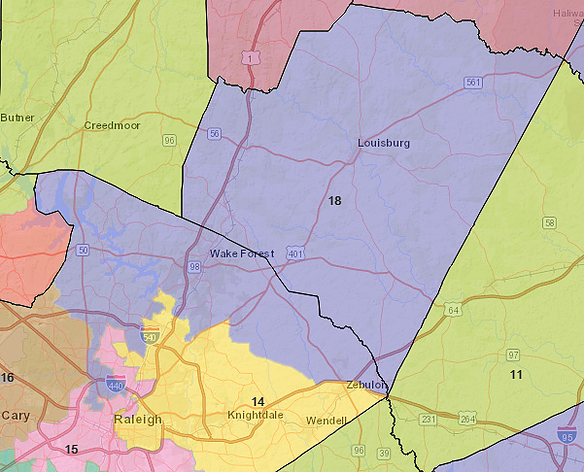 Well, he should consider it. He hasn't made any public pronouncements about running again -- at least not that we can discover -- but he would be well positioned to capitalize on his name recognition from the 2018 race.

Mack Paul had the closest loss of any Democrat running for any NC Senate seat in 2018, losing to incumbent Republican John Alexander by 2,639 votes out of 103,804 total votes cast, the highest turnout for all NC Senate races. District 18, weirdly gerrymandered into downtown Raleigh but taking in mainly northern Wake County (and the town of Wake Forest) and all of much more rural Franklin County, was considered "lean Republican" in 2018, which means that Mack Paul did exceptionally well in that election.

Paul is a real estate lawyer (Columbia University School of Law), a founding partner of Morningstar Law Group, and a past chair of the Wake County Democratic Party. As Democratic Party chair in 2011, Paul was very active in helping elect progressive members of the Wake County School Board which had been taken over by extremely conservative Republicans in 2009. The Republicans had dumped the longstanding diversity policy which the newly elected Democrats began restoring.

Republican John Alexander was first elected in 2014 in Senate District 15 by a very narrow margin (50.4% v. 49.6%), won reelection with just 50.01% in 2016, got double-bunked in 2018 with another Republican (who decided to retire) into District 18, and managed to hold onto a senate seat against a strong tide running in Mack Paul's direction. With Trumpism turning to wormwood and gall in that part of North Carolina, John Alexander looks ever more ripe for the plucking in 2020.

UPDATE
Just heard that Christine Kushner, who won a seat on the Wake School Board in that 2011 race, will be running for this Senate seat in District 18. She'll be a strong candidate. I'm told that Kushner is "very squared away. Also can raise money."

I personally would prefer a candidate with more positive name recognition than Kushner...! This is the seat (Senate 18th) Chad Barefoot held for a while, a mentee of Paul Stam, until his own party re-gerrymandered the district and Chad decided to retire to spend more time with his family. Barefoot was the originator of the attack on the Wake County School Board, and a plan to redistrict the Wake County Commission--I can see why Ms. Kushner might be pumped to run against his successor Republican. Barefoot was a clueless ASU student (I know, I worked with him on campus fraternity stuff) and got swept up in the conservative political catch-all net of Southeastern Baptist Theological Seminary. His mother in law is one of the strongest (shrillest?) anti-abortion voices in the state. Whoever gets the Dem nomination has a good shot, seems to me, to re-take this Senatorial district.

Thanks, Brother Doc, for bringing up the Chad Barefoot connection. I decided not to go into all that history because I was pushed for time, but I appreciate your filling out the background.

Apparently, Kushner has very good name recognition in Wake because of her years on the county school board. It's hard to know from this distance who will be the stronger candidate.