Will Cunning Republicans in the General Assembly Succeed in Bribing Democrats To Override Gov. Cooper's Veto? 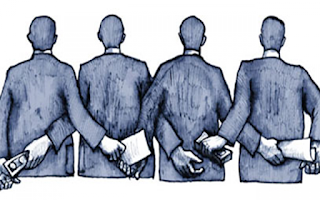 According to Rep. Pricey Harrison (D-Guilford), Republican budget-writers in the General Assembly dropped in 477 dollops of free money, "earmarks" for specific projects in favored districts, totaling $353 million dollars. This is the budget that Governor Cooper just vetoed.

Some of those earmarks were strategically aimed at getting Democratic votes, and it worked for seven Democrats who did vote for final passage of the budget. (Who and what they got has been detailed by Colin Campbell of NCInsider fame.)

(For the record, Sen. Davis also voted for S359, the anti-abortion bill "that would criminalize doctors, shame patients, and disproportionately impact black women," and he also helped the Republicans to override the governor's veto. The veto has held so far in the House.)

The question now moves to this: Will these seven Democrats also vote to override the governor's veto of the budget? (I think we have an inkling of what Sen. Davis is likely to do.)

Gotta hand it to Berger-Moore, and we should have foreseen these outright bribes-for-votes. It's a smart strategy to make up for losing their super-majorities last fall. Should have seen it coming, but it's hard to out-think a bunch who don't think past their ability to grab more power.

Posted by J.W. Williamson at 7/06/2019 09:15:00 AM
Email ThisBlogThis!Share to TwitterShare to FacebookShare to Pinterest
Labels: North Carolina budget, Roy Cooper