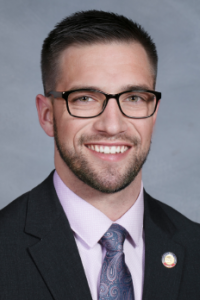 Background on Rep. Cody Henson from March, when he was merely under sheriff's investigation for cyberstalking his estranged wife, who had incidentally been granted an order of protection against Mr. Henson. His sudden resignation today, reported by Aditi Kharod:


Rep. Cody Henson (R-Transylvania) announced his resignation Wednesday morning, one day after he pleaded guilty to one count of cyberstalking, accepting a deal for 18 months of probation and deferred prosecution.

Henson is already under a domestic violence order of protection preventing him from contacting his estranged wife, Kelsey Meece. As part of the deal, Henson will also have to get mental health treatment, domestic violence abuser treatment, and complete a substance misuse assessment. He will not have access to firearms for his probation period.

At the time, the North Carolina Department of Justice accepted a condition of Henson’s: that he be allowed to leave the state for legislative business despite his probation. A prepared statement by Henson’s attorney stated that Henson intended “to fulfill his commitment to represent his district” and that he did not plan to resign his seat.

Posted by J.W. Williamson at 7/24/2019 11:15:00 AM
Email ThisBlogThis!Share to TwitterShare to FacebookShare to Pinterest
Labels: Cody Henson

Well, as we used to say in elementary school, "good riddance to bad rubbish." He still got off pretty light. When counting votes in the House now, is this one less GOPer to keep the gridlock going on the budget compromise?

Wow, Brother Doc, you had some advanced elementary school.