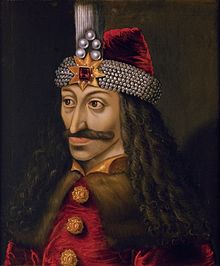 Vlad III Dracula, the real-life 14th Century Romanian potentate who became the inspiration for the fictional vampire of Bela Lugosi fame, hated immigrants too. In his case, it was Ottoman Turks, coming up from the south and threatening to overrun the kingdom. Vlad III Dracula had them impaled by the dozens, by the hundreds, if you believe contemporaneous accounts.

Habitual cruelty. A taste for blood.

Nothing is clearer than this: Twitterman's whole reelection pitch to the masses is that he's prepared to be increasingly cruel to immigrants from the south. Rachel Maddow reported last night on a new inspector general report exposing inhuman conditions at border detention facilities, "and the mounting outrage among Americans as new cruelties are revealed daily, a dynamic Donald Trump welcomes and encourages as a means of agitating his base of supporters."

Vlad thinks impaling people makes him more popular. Didn't work out that way in history. The invaders from the south ended up dismembering him.


Posted by J.W. Williamson at 7/03/2019 09:49:00 AM
Email ThisBlogThis!Share to TwitterShare to FacebookShare to Pinterest
Labels: anti-immigration, Donald Trump