Shivving Winston-Salem ... Because They Can


Currently, the city of Winston-Salem elects eight members to its city council (plus a mayor who only votes to break ties). Currently, seven of them are Democrats and one is a Republican. Currently, four are white and four are black. Forsyth County Republican reps in the General Assembly filed a vicious little bill last Thursday (March 28) to change that council in radical ways.

The bill would reduce council districts (wards) from eight to five. Three black incumbent women (D.D. Adams, Vivian Burke, and Annette Scippio) would be shoved into the same district, to run against each other. Incumbent white male Dan Besse would also be double-bunked with the lone Republican. The three dissolved ward seats would become "at large" council seats, the mayor would be given a vote on every measure before the council, and all terms of office would be reduced to two years.

The two House sponsors of this snide innovation, Donny Lambeth and Debra Conrad, might relish the punishment they're meting out to their partisan enemies in the urban core of Winston-Salem. But they might want to take note of what happened in Guilford County after a vicious little attempt to upend the Greensboro city council in a similar way (see last paragraph below). Neither Lambeth nor Conrad won reelection last fall by unassailable margins. As a matter of fact, Lambeth beat his Democratic opponent, Dan Besse (where have I heard that name before?), by just over 2,000 votes, and Debra Conrad's Dem opponent, Terri LeGrand, came within 3,200 votes in a much more rural section of Forsyth. (Full disclosure: I contributed to both the Besse and the LeGrand campaigns.)

One of the black council women targeted with triple-bunking, D.D. Adams, ran against 5th District Congresswoman Virginia Foxx last fall, and she "emphatically denounced" Lambeth and Conrad to the Winston-Salem Journal "for what she described as a racist payback for the Democratic activism of black women": 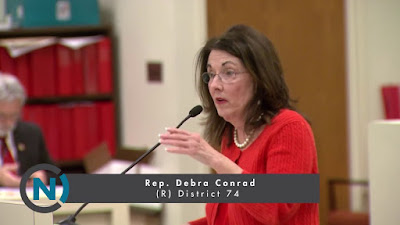 Said Dan Besse: "It is no coincidence that they drew me into the only Republican-leaning district ... When you look at the fact that I challenged Donny, and D.D. challenged Virginia Foxx -- that has to flag the city on the radar of the Republican party structure."

No kidding, the arrogance. "I don't know what problem they are trying to solve," said the lone Republican on the council, Robert Clark, referring to Lambeth and Conrad. "I think the city council should be consulted before anything moves forward. They don't talk with anybody, they just do it ... I am absolutely puzzled." That's what the Republican thought.

Remember that Republicans in Raleigh also overreached for partisan advantage in a proposal to redistrict the city government of Greensboro. How did that attempt work out for them? In this last election, Guilford County saw a net gain of one Democrat in the NC House (Ashton Clemmons) and one Democrat in the NC Senate (Michael Garrett). Garrett actually beat the author of the Greensboro redistricting attempt, Sen. Trudy Wade, a comeuppance that could instill a little humility in Lambeth and Conrad.