Could This Ex-Marine Put the NC-3 Special Election in Play for Democrats?


Retired Marine Col. Richard “Otter” Bew announced yesterday that he will be running in the Democratic primary on April 30th in the first step toward running in the special election in NC-3 on July 9th to fill out the term of Rep. Walter B. Jones, who died last month. (News about other Democrats in this primary, included below.)

Bew completed the Platoon Leaders Course in Quantico in 1988, received a degree in Philosophy from Lehigh University in 1989, and was commissioned a Second Lieutenant of Marines. He became a naval aviator in 1991.

He retired from the Marines last fall after 29 years in the service. He served in Afghanistan, Iraq, Bosnia, and Serbia, and he already knows some of the doorways and secret knocks on Capitol Hill, having served as deputy legislative assistant to Gen. Joseph F. Dunford Jr., the chairman of the Joint Chiefs of Staff. He also served as a legislative aide to the Commandant of the Marine Corps, and he earned a master's degree in international public policy at Johns Hopkins.

In other words, he's a richly experienced, smart dude to try for a seat in Congress, and he does remind us of the many ex-military personnel who ran strong campaigns last fall as Democrats, from Conor Lamb in Pennsylvania to Amy McGrath in Kentucky.

"Otter" Bew was watching those races too: “When I saw folks like that step out and run really good campaigns and do so with a different kind of dialogue — one that’s inclusive — and stay on target, the thing that I took most from that is inspiration that this can be done,” Bew said. 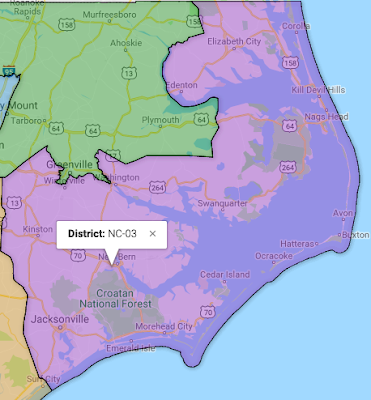 He's sensing a seismic shift in the voting public, a change that produced last fall the largest turnover of Congressional seats since Watergate, and even a deeply red district like the NC Third, which gave DJT 60% of the vote in 2016, can produce surprises, especially in a special election. “I got strong feedback that folks who normally would have opposed a candidate from the Democratic Party are more open to it now,” Bew said. “You have to really be ignoring some clear evidence of how [the US is] viewed in the world and how we’re performing in the world to still be sticking — with the same level of your conviction — with your vote from two years ago.”

There's some wishful thinking in that assessment, no doubt, but there's also a creeping reality.

Bew says he won't accept corporate PAC money. He puts health care issues at the top of what motivates him for office, and he acknowledges climate change as a major defining problem going forward..

He has professional help, obviously, judging from his website.

Other Democrats in the April 30th Primary
Filing ends this Friday, so there may be additional candidates by Saturday, but at the moment:

Isaiah "Ike" Johnson, also a retired (1999) U.S. Marine who mentors students in Onslow County Schools. Johnson is African-American and ran unsuccessfully last fall for the NC House District 14 seat, receiving 41% of the vote in that race.

Dana Outlaw, New Bern’s mayor (since 2013) and the owner of a self-storage business and real estate consulting and appraisal business.

Ollie Nelson, another retired African-American Marine and a Jacksonville pastor.

Republicans Also Competing to Replace Walter Jones in Congress
There are currently at least four, one more wacko-conservative than the next (Michael Speciale ... really!). We'll wait to see who wins the primary in April before we waste our time researching all of them.

Footnote
If no candidate in either party primary fails to win 30% of the vote on April 30th, the 2nd primary will fall on July 9th, with the special election proper pushed to September 10.