The New Frontrunner for NCGOP Chair 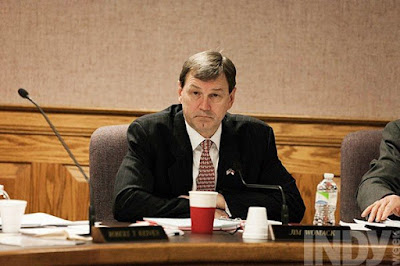 Robin Hayes has been chair of the NCGOP since April 30, 2016, when the Republican executive committee ousted Hasan Harnett from the job. Hayes had been NCGOP chair before, from 2011-2013, and he had served ten years in the US House, from 1999-2009. Hayes was "Republican establishment" all the way, while Hasan Harnett was Tea Party conservative, backed by the rowdier elements and movement conservatives. Most observers thought -- up until yesterday -- that Robin Hayes would run again for the party chairmanship and that he could probably win (with the help of Executive Director Dallas Woodhouse), but Hayes has suddenly dropped out of the running, citing "issues with his mobility" (following hip-replacement surgery and a recent fall at the Cabarrus County GOP Convention).

That suddenly throws the chairmanship of the NCGOP open for a cantankerous and entertaining contest, with Lee County Republican agitator Jim Womack probably emerging as the leading anti-establishment contender. The chairmanship will be decided by the NCGOP state convention in June. Womack ran against Robin Hayes in 2017, was defeated by double digits, but has never stopped his campaign to remake the state party and put it on a "war-footing": "We will campaign on all fronts– in the media, in government circles, and especially in the trenches –where we will encounter the most ardent socialists and anarchists. We will prevail!" ("We Are at War," by James Womack, April 4, 2017)

Those armored columns of "ardent socialists and anarchists" are figments of imagination that have apparently taken on some ample flesh in Mr. Womack's head: He also alleges that "the democrats [sic] have hired agitators who roam from venue to venue seeking to disrupt conservative groups and political events." If you can talk yourself into that fantasy, you'll also believe that millions of "illegals" are always voting against The Right.

Did we say "agitator"? Womack and about a dozen other "grassroots activists" put paper sacks on their heads "in peaceful protest" at the 2016 GOP state convention "each time the convention chairman or central committee staff were perceived to be manipulating the proceedings to disadvantage grass roots candidates running for office, or when resolutions and platform changes were being suppressed" ("Wearing a Paper Bag at Convention").

Womack was elected to the Lee County Board of County Commissioners in the Tea Party wave of 2010 and served four colorful years (he called his critics "libtards," which gives you a sense of his level of discourse). He was a frequent target for criticism on the blog "The Rant: News Out of Sanford, North Carolina."

As the appointed chair of the state's Oil and Gas Commission, Womack has been a vociferous advocate for fracking, and when the Lee County Commission -- on which Womack no longer served -- passed a moratorium on fracking, Womack went jihad in defense of five Lee County landowners who claimed their rights were being infringed by the moratorium. The five, turns out, had written (or had ghostwritten for them) identical letters, all addressed to Womack, and all five, turns out, were Womack's buddies. Lisa Sorg attended that meeting of the Oil and Gas Commission:

...Jim Womack, the agency’s controversial chairman, seemed agitated, frantic even, to attend to what he deemed as Very Important Business: to hear from disgruntled people who want the commission to overturn Lee County’s fracking moratorium.

“I’m a little bit motivated,” said Womack, a long-time fracking proponent, as he pressed the commission’s attorney for more legal leeway on hearing the complaints.

He's gonna make a fine chair for the NCGOP!

But side benefit: If he makes it, Dallas Woodhouse will be gone as executive director!

UPDATE
This previously sealed indictment became public this afternoon, after the above was posted: Robin Hayes, along with three others, federally indicted for bribery, or more specifically, "of directing illegal political donations to North Carolina Insurance Commissioner Mike Causey in an effort to bribe him." Here's more news about it.

So "mobility" did turn out to be a disqualifier for Hayes to run again for NCGOP chair, since he surrendered himself to federal authorities today.

Um, the elephants have wee bit more trouble. Do you already know of this indictment?

news flash: Hayes and 3 others indicted by feds for fraud and bribery; despite his mobility issues Hayes showed up in court in Charlotte this morning....what a fine bunch of party leaders the GOPers have coughed up on our state.

So much for mobility:
https://www.thedailybeast.com/robin-hayes-north-carolina-gop-chairman-indicted-on-fraud-bribery-charges?ref=home