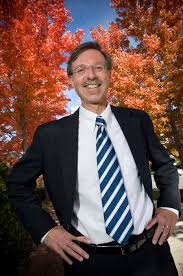 Our friend Dan Besse, a Winston-Salem city councilman, announced today that he is running for the District 75 NC House seat which is currently held by Republican Donny Lambeth. Dan is an attorney, a graduate of UNC Law School, and a five-term member of the Winston-Salem city council. He's a righteous dude and is going up against a powerful Republican in Donny Lambeth, who has connections to all sorts of Republican money.

Dan says, “Our state legislature has forgotten how to cooperate. We need a new set of priorities working for us at the state level: improving our schools, helping our people stay healthy, protecting clean water and air, and creating jobs. I’ll bring to this task the lessons I’ve learned serving in local government—it’s all about neighbors working together to help our communities.”

Lambeth was on the Forsyth School Board for a number of years before taking a seat in the NC House in 2013. He's sometimes been regarded as a moderate, so far as moderation goes with the NC GOP, and he was even mentioned a few years ago as the Forsyth Republican who could successful challenge Virginia A. Foxx for her US House seat. (He might be a vast improvement.) Despite the reputation, he's been a total foot soldier for the extremist leadership in the NC General Assembly.

According to the Triad City Beat, the NCGA's high-handed and dictatorial attitude toward our state's municipalities explains at least part of Dan's motivation for running this year. Besse "experienced the heavy hand of Raleigh up close and personal last year when his proposal to name Winston-Salem a 'welcoming city' was scuttled under the threat of punitive legislation that would withhold tax revenues from the city.​"

The 75th House District is "largely suburban." It "creeps along Forsyth County’s southern border with Davidson County, from Kernersville in the east to Clemmons in the west, with a finger reaching into southwest Winston-Salem, including the Ardmore neighborhood."

If you'd like to contribute to Dan Besse's campaign -- and you should like to very much! -- https://www.bessefornc.com/donate.