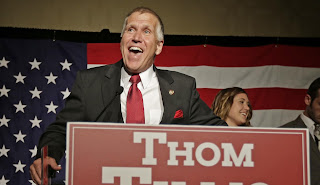 On February 25th, Sen. Thom Tillis published an op-ed in the WashPost (doubtless, someone else wrote it) in which he announced that he would be voting against Twitterman's use of emergency powers:


It is my responsibility to be a steward of the Article I branch [houses of Congress], to preserve the separation of powers and to curb the kind of executive overreach that Congress has allowed to fester for the better part of the past century. I stood by that principle during the Obama administration, and I stand by it now.

Conservatives rightfully cried foul when President Barack Obama used executive action to completely bypass Congress and unilaterally provide deferred action to undocumented adults who had knowingly violated the nation’s immigration laws. Some prominent Republicans went so far as to proclaim that Obama was acting more like an “emperor” or “king” than a president.

There is no intellectual honesty in now turning around and arguing that there’s an imaginary asterisk attached to executive overreach — that it’s acceptable for my party but not thy party.

That principled position became inoperative today. Tillis voted against the resolution to overturn DJT's use of emergency powers. The resolution passed anyway, with a dozen other Republican senators standing up when Tillis ran away.

Conservatives in North Carolina were vowing a primary for Tillis next year, and no doubt the White House threatened him too, perhaps by Trump's promising to appear at an anti-Tillis campaign rally next year.

Tillis's flipflop may have been facilitated by the fact that no big-name Democrat (so far) has announced a run for his seat. He has more to fear from his right flank.

Please good Democrats. Someone out there has to come forward to challenge this weak kneed POS

Please please let some "big name Democrat" step up and give this guy the shellacking he so richly deserves. There are good candidates waiting in the wings I think?

North Carolina now has its own Susan Collins. Such fortitude.