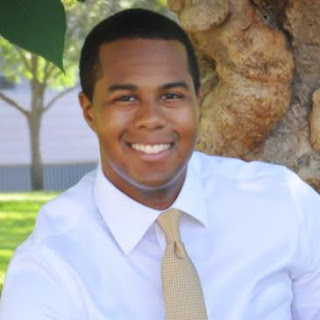 Last Thursday State House Rep. Chaz Beasley announced via video on his Facebook page that he is a candidate for Lieutenant Governor of North Carolina. He's entering a Democratic primary that is already getting crowded, with Cal Cunningham and Terry Van Duyn the big names with four or more others also putting their names forward.

Whatever happens, Chaz Beasley should be a political force in North Carolina for many years to come.

He grew up in Statesville in a single-parent household, graduated at the head of his class in 2004 from Newton-Conover High School, went to Harvard and graduated with high honors in economics in 2008, got a law degree from Georgetown in 2013 and ran successfully for the NC House (District 92 in Mecklenburg County) in 2016. He's now in his second term. He's an associate in the Alston and Bird law firm where he specializes on finance, representing financial institutions in corporate and structured debt financing.

Posted by J.W. Williamson at 3/25/2019 08:41:00 AM
Email ThisBlogThis!Share to TwitterShare to FacebookShare to Pinterest
Labels: Chaz Beasley

Statesville? Is that in Alexander County where I was told he grew up.