What Kim Strach Said to UNC's Thomas Shanahan on Thursday

Early last week, UNC System General Counsel Thomas Shanahan -- having taken heat over his negative interpretation of his 16 universities' ability to sign an "attestation" form about using student IDs for voting, finally asked for an interpretation of the law from the NC State Board of Elections (SBOE). An interpretation by the SBOE stands as the final authority. It can only be challenged in the courts or through a re-write of the law.

Reproduced below is the three-page letter from State Board of Elections (SBOE) Executive Director Kim Strach answering Shanahan's interpretation of the attestation form. He's just wrong on all points save one. Namely:

2. Are universities obliged to ask their students to verify -- prove -- their date of birth, citizenship status, and Social Security number in order to qualify for a photo ID? No. You're confusing voter registration with photo ID. Director Strach's exact words: "We do not view the statute to require the college or university to substitute its judgement for that of the elections administration apparatus whose role it is to monitor the voter rolls across the State."

3. Shanahan: What if not all students provide a SSN, date of birth, or citizenship status during the enrollment process? Don't chancellors have to sign “Under penalty of perjury"?  Can we re-write that "under penalty of perjury" part? Answer: No. There just has to be a process by which evidence of identity is requested. If you're satisfied with a student's identity sufficient to enroll him, you're good for issuing an official photo ID.

4. Are "selfies" submitted by the students sufficient for use on a photo ID card? No. Photographs must be taken by the institution or its contractors. (This ruling will affect half a dozen high enrollment institutions (including NC Central, UNC-Charlotte, UNC-Greensboro, Pembroke, UNC-Wilmington, and Western Carolina), which will need to change their procedures.)

5. Can an institution issue a separate and special photo ID for voting purposes if it wants to? Answer: Sure.


1. Will you share -- have you already shared -- this letter with the 16 chancellors? Because in the specific instance of Appalachian State University, Chancellor Everts' spokeswoman was still spouting two days ago what appear to be official negative talking points about student photo ids -- talking points that are now proven totally wrong for ASU students by SBOE's official ruling.

2. Did those negative talking points used by Chancellor Everts (and other chancellors?) come directly from Shanahan? ("There's just so many stumbling blocks to certifying student IDs for voting, and wouldn't it be okay just to send them down to the Board of Elections at the courthouse to have their photo taken and their voting ID made?") Kim Strach's letter clears those stumbling blocks (except for the issue of "selfies," which is just sensible).

3. Are you prepared to accept the reality that all 16 universities can't be uniform in their practices, and that that's okay? Only on the issue of "selfies" is there no flexibility for method and practice. 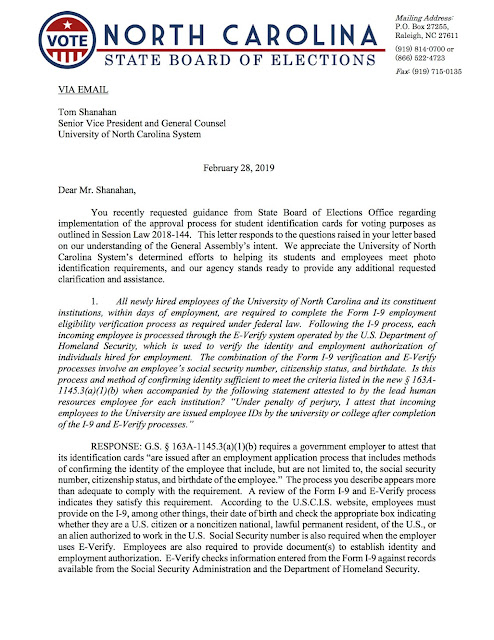 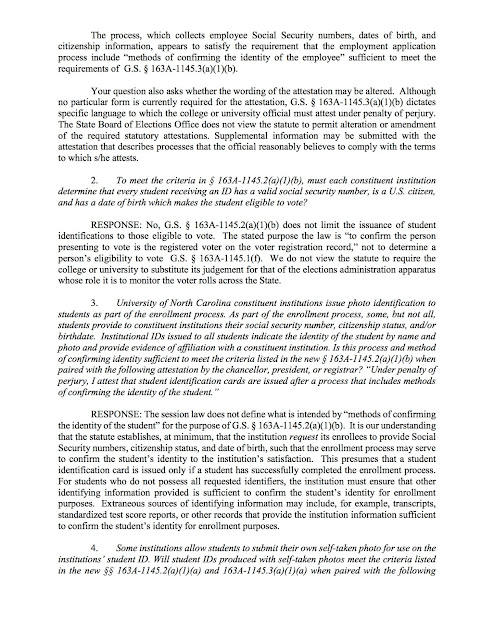 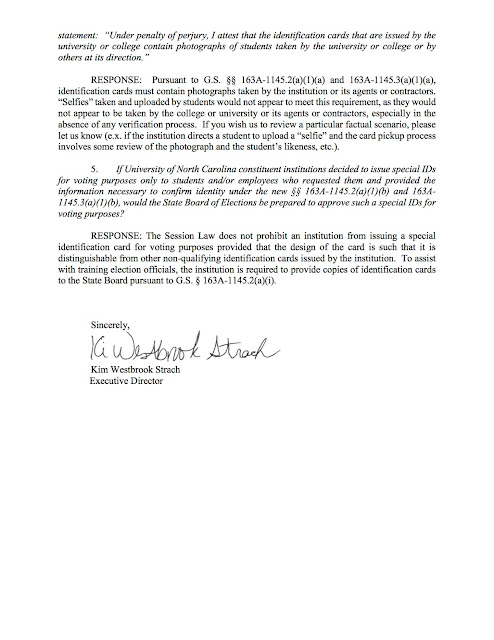