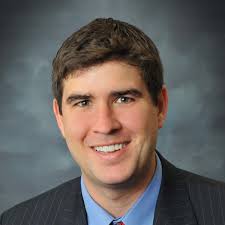 Chris Anglin, "Republican constitutional conservative," filed yesterday afternoon in the NC-9 Republican primary for the seat won lost by preacherman Mark Harris (who is now under investigation for possible election law violations). You should remember Anglin's claim to celebrity. Last year he had to fight in the courts for the right to run for a seat on the NC Supreme Court. Democrat Anita Earls eventually won that seat, possibly because Anglin divided (weakened) the Republican vote.

Yesterday, the NCGOP immediately went ballistic over Anglin. "Chris Anglin ain't a Republican," fumed Executive Director and wielder of big cigars, Dallas Woodhouse. Chris Anglin was a Democrat who changed parties to run as a Republican in that Supreme Court race last year. True. He had every right to do so. The Republicans had passed new law to cancel judicial primaries, which facilitated two competing Republicans on the ballot. Too bad for them. Too clever for Anglin!

Dallas Woodhouse probably didn't like Anglin's statement yesterday about how he interprets his "constitutional" values: He said Republican President Donald Trump “constantly lies to the people, shows fealty to dictators, insults our allies, fills the swamp with corruption, explodes the deficit and relentlessly assaults the rule of law.”

Chris Anglin doesn't live in the 9th Congressional District. Federal law requires only residence within the state, not in the specific CD. These other Republican candidates also live outside the 9th:

A total of ten Republicans will battle it out in the primary on May 14. A run-off in September seems inevitable, with the general election consequently pushed into November.