One of Our Two Spectator Sports in 2019 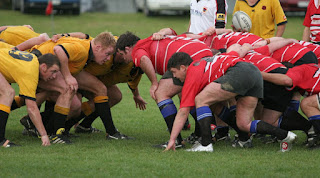 As of yesterday, there were 11 Republicans signed up to run in the April 30th primary for the special election in the NC-3. (We discussed the leading Democrat, "Otter" Bew, yesterday, down-column.) The Republican scrum includes some hair-raising personalities, and that primary will be worth watching, but two third-party candidates also caught our eye because they'll be on the final ballot and will inevitably drain some Republican support in the final contest for the seat.

(Incidentally, the number of Republicans in that primary seems pretty certain to force a run-off -- if no one gets to 30%. A second primary will be scheduled for July 9th, with the final contest pushed to September 10th. Then whoever wins the special election will have to turn around in early December and file for reelection in 2020.)

Greg Holt, Constitution Party. Ran for Craven County Commission in the Republican primary of 2018 and lost by almost 15 points. After losing that primary, he switched to the Constitution Party and ran for the same County Commish seat that fall and got almost 23% of the vote. Holt, plus a weak Democratic candidate, could not stop the winning Republican from garnering over 50% of the vote. Holt is owner of Cravin-a-Cup, an office, janitorial, bottled water, and coffee supply business in New Bern. Holt was elected in 2017 to First Craven Sanitary District, a Craven County water authority. He's a member of Coastal Carolina Taxpayers Association, a Tea Party type group, and in an interview, Holt came out strongly against Sharia law in the US, for Christian prayer in schools, for concealed carry in schools, and for Trump's wall.

Shannon W. Bray, Libertarian. He's 46 years old and a cyber security practitioner. He has a website dedicated to Microsoft products (branding himself "a Microsoft Certified Master") and a Twitter account (@NoIdentity29) that is dedicated exclusively to cyber security. Confusingly, Bray's LinkedIn page says he's running for Congress in 2020, but in Rep. George Holdings' Second District, so perhaps he has long-range plans for breaking into politics. He lives in Apex in Wake County, which means he's running out of the 3rd District.

UPDATE
Jerry C. Thompson of Hampstead in Pender County, an unaffiliated voter, is circulating a petition to get himself on the ballot in the NC-3 special election. According to Gerry Cohen, he needs 7,551 signatures by April 30, a fairly steep hill to climb, especially as Thompson lives in the 7th Congressional District, not the 3rd.