The Ritual Humiliation of Steve Long


[Thank Gawd for @JoeKillianPW, who's actually in the room for the UNC Board of Governors meeting at AppState this morning. I'm depending on his Twitter feed] 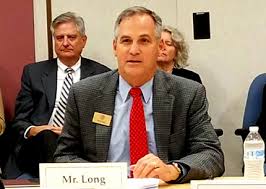 You remember Steve Long? He's the one member of the Board of Governors who's come out publicly against UNC BOG Chair Harry Smith. Even urged his replacement. Primarily for the ouster of Eastern Carolina University Chancellor Cecil Staton.

This is what happened to Steve Long this morning:


JoekillianPW‏ @JoekillianPW
UNC Board of Governors member Steve Long is now apologizing to Chairman Harry Smith and the board for speaking out after the ECU chancellor's ouster. He said he should have come directly to Smith rather than speaking publicly on the matter in an "intemperate" way. #NCPol #ECU

JoekillianPW‏ @JoekillianPW
Long previously said Smith needed to step down, accused him of carrying out a personal vendetta against ECU Chancellor Cecil Staton. He now says he didn't handle things the right way. Smith thanks him, says they continue to be friends. http://ow.ly/hGBn30o9jm1  #UNCPol #ECU

@JoekillianPW
Interim UNC System President Bill Roper does not acknowledge any controversy over asking the ECU Chancellor for his resignation, says simply he thanks the chancellor for his service and moves on to other business. #NCPol #ECU #UNC

JoekillianPW‏ @JoekillianPW
Reminder: Several UNC BOG members told Policy Watch earlier this week there was a movement to formally censure board member Steve Long for speaking out over the ECU Chancellor ouster and Smith's role in it. Long made an abrupt about-face this morning, apologizing. #NCPol #ECU

Posted by J.W. Williamson at 3/22/2019 09:47:00 AM
Email ThisBlogThis!Share to TwitterShare to FacebookShare to Pinterest
Labels: Harry Smith, Steve Long, University of North Carolina