Will Not Be Spending More Time With His Family 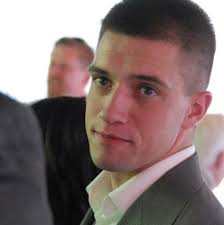 Republican NC House Rep. Cody Henson (District 113, Transylvania, Polk, and part of Henderson counties) announced that he will not seek reelection in 2020. He's currently in his second term, the youngest member of the NC House. He's also fighting serious allegations brought by his estranged wife who was granted a protective order against Henson last month. More recently, the Transylvania County Sheriff’s office issued a criminal summons in a cyberstalking complaint also filed by his wife. Two small children are involved in the drama.

Henson's wife said she feared for her life and the lives of her children. In the hearing for the protective order, she presented to the judge a binder of messages she had received from her husband.

Henson describes himself as a Christian conservative who's big on family values, but his wife is clearly afraid of him.

Posted by J.W. Williamson at 3/27/2019 08:00:00 AM
Email ThisBlogThis!Share to TwitterShare to FacebookShare to Pinterest
Labels: Cody Henson