Unchained (But Can't Skip Away from Judgment) 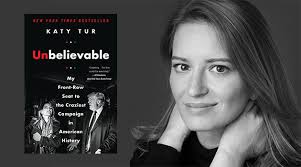 Stuck inside during yesterday's deluge followed by today's snow showers and cold wind, I've entertained myself by reading Katy Tur's "Unbelieveable: My Front-Row Seat to the Craziest Campaign in American History," her account of the over 500 days she spent with Donald Trump in 2015 and 2016 as he was running for president.

She's a very good writer, and I finished the book in two sittings, reliving at a safe remove what I already lived in the lobster pot of breaking news during that year and a half.

Tur was at every Trump rally and became a favorite Trump target, called out by name by Trump and offered up to those screaming crowds as a sort of symbolic sacrifice standing in for all the hated "fake news" media. She was literally spat upon and threatened. This passage from the book resonated, detailing how the rally crowds fed off Trump and got their "patriotic" license to act out. This passage follows the release of a certain notorious tape:

The enthusiasm for Trump isn't waning. The crowd at the Mohegan Sun Arena in Wilkes-Barre, Pennsylvania, the night after the [St. Louis] debate, three days after the Access Hollywood tape, is just as big as ever and even rowdier than others have been. When I walk in, a man and his wife are leaning over the bicycle racks of the press pen. At first it looks like they're trying to talk to a CNN reporter. When I get closer, though, I realize they're actually yelling at her.

You need more makeup, the husband advises. Keep piling it on! On second thought, don't bother, he adds. You're so ugly it won't help. He is going on and on, heckling this reporter as his wife stands there, laughing. They are trying to break her concentration, to draw a reaction, but the reporter is a rock. They're about four feet from her, but she is completely ignoring them.

I wish I could have done the same. Instead I start yelling at the man. I tell him to stop it and I congratulate his wife on being married to such a great guy. After they walk away, the reporter walks over to her camera. A couple of minutes later she is on live TV. The couple is standing off to the side still staring at her, hoping she'll mess up or give some hint that they rattled her. I'm staring, too, hoping she doesn't give them the pleasure. She doesn't miss a beat.

The thing is, they don't look like cruel people. They look like they're in their forties. They're wearing designer jeans and nice boots. They seem healthy and comfortable, and it's hard to imagine them acting this way at home or in the office. Hillary Clinton recently called Trump's supporters a "baset of deplorables," and while some might be easy to single out like that, most aren't. A lot of your coworkers and your neighbors. They're your taxi driver, your fireman, and your supermarket cashier. They're the mom in riding boots and a Barbour coat helping her cute daughter with her school science project. You would never know that they're Trump supporters, quote unquote deplorables.

But inside a Trump rally, these people are unchained. They can drop their everyday niceties. They can yell and scream and say things they'd never say out loud on the outside.

"Hillary Clinton is a cunt!"

"Immigrants need to get the hell out!"

On the outside, this kind of behavior is disreputable. But inside a Trump rally, they can tell a woman she's ugly and needs more makeup. They aren't deplorables. They are patriots. And they're waiting to see their hero for the first time after a three-day fight for his political life.

He won the fight. We're living the outcome, which has been no less bizarre, no less dangerous to the body politic, no less abnormal that the campaign that preceded it, and I'm grateful to Katy Tur for her bravery, her stamina, and for her appreciation for the judgment of history:

Every day on the campaign trail Trump's actions test the definition of normal. He calls for jailing his opponent. He openly admonishes sitting generals. He singles out minority groups for blanket condemnation. He goes after the spouses of his rivals. He questions the integrity of the election itself. He is endlessly hostile toward the media. All of this Trump does so often that it's a struggle to remember what's old news, by the stadard of his behavior, and what is big news, by the standard of history.

We're coming up on an election in 2018 which will be the American voting public's first chance to pass judgment since that dark night in November 2016. It will be a judgment, finally, on disreputable behavior. If it is not, then we are truly doomed. If we are salvageable as a democratic Republic, it will also be a judgment on those in a political party which have condoned, facilitated, and applauded the father of lies.

Americans had to put up with Obama for eight years.

You commies can put up with trump for eight years.

Tur is awesome, sounds like a trump rally is more like a sick version of THE PURGE