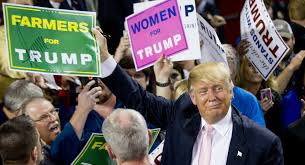 Fun fact: China -- at least prior to trade war threat and counter-threat -- bought a fifth of North Carolina's tobacco crop. More people smoke cigarettes in China than there are people in the United States.

And what does Twitterman do but destabilize that income expectation for some 48,000 of the state's farmers. If there's one thing that farmers hate more than the weather, it's the expectation that expectations can't be counted on any more.

Former Congressman Bob Etheridge, who's become the point man on this issue for the NC Democratic Party, said, “Farmers today are scared to death. They’re frightened because they depend on predictability from their government. ... And what are we getting? This is what we’re getting from Washington today. Chaos. This administration continues to force chaos and confusion on people.”

Well, that's actually the least of what this administration is forcing.

Posted by J.W. Williamson at 4/10/2018 08:56:00 AM
Email ThisBlogThis!Share to TwitterShare to FacebookShare to Pinterest
Labels: Bob Etheridge, Donald Trump