The Foxx Gets Jiggy 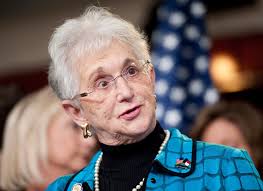 Indebted to Jule Hubbard from the Wilkes Journal-Patriot who took down Virginia Foxx's words at the Wilkes Republican Lincoln-Reagan Day Dinner last Saturday night. Annotations are mine.


Speaking to crowd of about 180 people at the annual political fundraiser, Foxx said Republicans can maintain a majority in the U.S. House, “but it won’t be easy because they [Democrats] are going all out against the president and against us…. North Carolina has a bullseye on it this fall.”


She added, “If we allow them to get the majority, we will lose our rights. All of our rights, starting with a few” such as the Second Amendment.

All. Including especially the right to demagogue it.

She noted that when Republicans gained a majority in the N.C. House and N.C. Senate in 2010, GOP leaders were able to draw state and federal legislative boundaries. “And they did exactly what the Democrats have done for 140 years, which is making districts that gave the advantage to our party.”

True dat too. The politics of sweet revenge.

She said former President Barack Obama and Eric Holder, attorney general under Obama  [a.k.a. The Blacks], are working fulltime to get Democrats elected to four to six more N.C. House seats and four more N.C. Senate seats. This would end the GOP supermajority of the state legislature.

She said Democrats plan to spend millions to win enough seats in 2020 to be the majority again. “You are going to see the most expensive legislative races in North Carolina that you’ve ever seen.”

The meat of the speech is a warning about keeping Republican control in Raleigh. A Republican primary for an NC Senate seat is happening right now in Wilkes (and adjacent counties) between two incumbents: Shirley Randleman, a queen bee, and Deanna Ballard, Franklin Graham's aide. Wonder if one or both of them were in that audience. 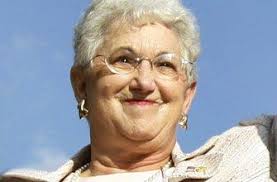 Because it's really all about me.

Foxx said North Carolina may gain a congressional seat if the 2020 Census only counts people with citizenship instead of still counting all residents. Opponents say only counting citizens would benefit Republicans. Several states have stated plans to sue to block President Donald Trump’s administration from adding the citizenship question to the 2020 Census, arguing that it violates the Constitution. Foxx said she supports including the question and only counting citizens.

Makes our skin crawl. Foxx depended for years on immigrant labor at her landscaping business and also in her home in Foscoe. (Incidentally, NC Attorney General Josh Stein has joined the Census law suit on the side of the plaintiffs.) And untrue to boot. NC would gain more if all those workers in the landscaping industry were counted.

She said the liberal left’s plans include tying up Republicans with lawsuits “because they cannot win at the ballot box. The only place they can win is with Carter, Clinton and Obama-era judges. That’s why they’re trying to slow President Trump down with getting his judges in place.”

Take a bow, Watauga! We've sued -- proud of it! -- but not because we're afraid of losing in a free, fair, and open election.

Foxx said she believes Republicans “literally are doing the Lord’s work. I think we represent a majority of the American people through our values. Our values and their values are the same.”

Doink! Put a coin in the purse.

The media doesn’t want Republicans to be successful, she said. “You’ve got to keep that in mind, in everything you hear. It’s their job to tear down Republicans. And they’ll do it every way they can, including out and out lies.”

Foxx said even Fox News sometimes is wrong, which she said was the case with the 2018 omnibus bill. She said the $1.3 trillion, 2,232-page spending plan, signed by the president on March 23, was among the most misconstrued and misunderstood pieces of federal legislation in a long time. The House approved the bill 256-167, with 145 Republicans (including Foxx) and 111 Democrats voting for and 90 Republicans and 77 Democrats voting against it. Foxx said legislators were criticized for hurriedly passing the omnibus bill without reading it.... 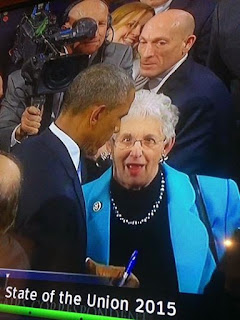 Foxx defensive about voting for that omnibus spending bill.

The omnibus spending bill included not what conservatives wanted, language explicitly banning Planned Parenthood from the Federal family, rather a continuing open pathway for Planned Parenthood to apply for some $500 million in government grants mandated for women's health. Foxx's answer: Trump's people in the Department of Health and Human Services will never give grants to Planned Parenthood. Trust me.

Foxx said it was incorrectly reported that the omnibus bill didn’t fund the border wall between the U.S. and Mexico. “There is a lot of funding in there for the border wall and I think you’ll hear the president talk more and more about that.

The New York Times reported that the omnibus legislation has nearly $1.6 billion for border security. This include $641 million for about 33 miles of new fencing, but it prohibits building a concrete structure or other prototypes the president considered, the newspaper reported.

Annotation by the reporter.


Foxx said the media incorrectly says Republicans control the House. “We have a majority, but we are not in control. The way for us to be in control would be to have about 290 votes. We have got 238.”

Posted by J.W. Williamson at 4/05/2018 08:51:00 AM
Email ThisBlogThis!Share to TwitterShare to FacebookShare to Pinterest
Labels: Virginia Foxx