Where Does Virginia Foxx Stand on the Firing of the House Chaplain? 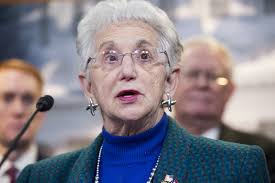 Father Patrick J. Conroy, a Jesuit priest and chaplain of the US House of Representatives, was fired by Speaker Paul Ryan last week. His firing caused an uproar, especially among Catholic representatives of both parties. Congresswoman Virginia Foxx is a Catholic. Did she protest? Not that we can tell. She joined fellow Republicans in turning aside a request for an investigation into the firing.

Perhaps Foxx was quiet because she pretends to be a Baptist back in the 5th District. Or perhaps she applauded the firing of Father Conroy because he wouldn't shut up about helping the poor:


During the tax overhaul debate, Conroy opened the House with a prayer on November 6, 2017, that those who “continue to struggle” in the United States would not be made “losers under new tax laws.”

Subsequently, after that November prayer that earned him a verbal warning from Paul Ryan, he prayed to God that lawmakers would help “the least among us.”

On another occasion he prayed for lawmakers to follow the example of St. Nicholas, “who fed the hungry, brought hope to the imprisoned, gave comfort to the lost.”

Later, he admonished lawmakers “to serve other people in their need” and “to pray for the unemployed and those who work but still struggle to make ends meet.”

After an immigration deal collapsed, he urged “those who possess power here in Washington be mindful of those whom they represent who possess little or no power.”

After the Parkland, Fla., school shooting, he  prayed for lawmakers to be “free of all prejudice” and to “fulfill the hopes of those who long for peace and security for their children.”

Okay, we see now why Virginia Foxx might applaud the firing of a man willing to remind her about the teachings of Jesus.

Posted by J.W. Williamson at 4/29/2018 08:44:00 AM
Email ThisBlogThis!Share to TwitterShare to FacebookShare to Pinterest
Labels: religion and politics, Virginia Foxx

Still looking for the verse where Jesus tells his disciples to steal from the rich and give to the poor.

It's next to the one where he oks gay marriage.