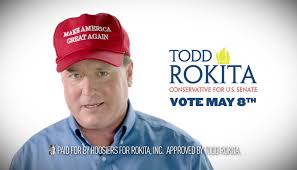 So far, the Republican candidates trying to out-Trump Trump have not been doing so well with voters. Roy Moore in Alabama wanted to be the Bama Basher in the style of his hero in the White House. Rick Saccone liked to say "I was Trump before Trump was Trump" in his Pennsylvania race for the US House, but he lost badly to Conor Lamb.

They're often Trump's parrots (see below), and often decked out in that scarlet hat and claiming to be more like Twitterman than their Republican opponents. Ex-Massey Energy Co. boss Don Blankenship, once he got out of prison and decided he wanted to be US Senator from West Virginia, became a Twitter sensation himself, emulating his idol (who's endorsed not one but both of the Republicans running against Blankenship in the primary. There's no end to irony).

Todd Rokita (pictured above in his MAGA hat) is running as the trumpster who wants to represent Indiana in the US Senate. "Not to be outdone, one of Mr. Rokita’s opponents, Luke Messer, tarred Mr. Rokita as 'Lyin’ Todd,' an echo of Mr. Trump’s epithet for Senator Ted Cruz, 'Lyin’ Ted.' Mr. Messer’s gripe? Mr. Rokita falsely claimed to have received the president’s endorsement" (Jeremy W. Peters). Rokita got the endorsement not of Corporal Bonespurs but of the corporal's head Indiana campaign persons back in 2016.

“We don’t need to investigate our president. We need to arrest Hillary,” thunders Don Blankenship in a campaign ad in West Virginia.

“I proudly stand with our president and Mike Pence to drain the swamp,” declares Rokita in his own TV spot in Indiana.

"Let’s get this ‘@#$% thing’ done,” Martha McSally, candidate for US Senate from Arizona, said at a campaign rally about The Wall, and was quoted in the press.

“Someone told me the other day that I was the first Trump, the Trump for Mississippi,” said Chris McDaniel, a candidate for Senate in Mississippi.

The obvious question: Is any of this strut and fuss playing well beyond his base? And what's his base, anyway? Maybe 35% of the voting public, which is only a fraction of the whole public which can and might actually vote.

Like Twitterman likes to say on all occasions, "We'll see what happens."