Thanks to Paul A. Specht, "Under the Dome" 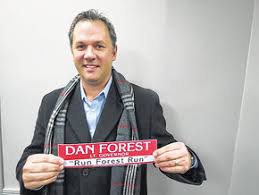 N.C. Lt. Gov. Dan Forest, "a likely candidate for governor in 2020," was among the headline speakers this weekend during the Civitas think tank’s Conservative Leadership Conference at the Crabtree Valley Marriott.

In a short speech Friday night, Forest argued that government can’t — and shouldn’t be expected to — fix all of society’s ills. But, he said, small-government conservatives are in a dangerous place in history because “the left” marches and lobbies for bigger government with “religious fervor.”

“It’s the thing that wars used to be fought over,” Forest said.

“You see it on issues like climate change or the Me Too movement or Black Lives Matter or gun control,” he continued. “Name the issue today, the fervor has reached a religious pitch in America. Why? Because it really is the religion of the left.”

Penis envy. Dan Forest is furious that the Republicans aren't showing the same fervour as Democrats. Personally, I pray to the earth and the sky, in that order, and I don't tend to think the exercise of the rights in a Republic to protest and to be heard is in itself a threat to the Republic.

Real societal and cultural change comes with changes in character, Forest argued. Referencing a push for more gun restrictions, Forest at one point noted that God punished Cain — and not the rock — when Cain used a rock to kill his brother Abel in the biblical book of Genesis.

At the root of everything wrong is character. True dat!

The left, however, “they don’t have a hope in God," Forest said. "They have no hope in a higher power. They are hopeless."

No, not hopeless, Your Holiness.

"They truly do believe that, but for the government, but for the work they do, there’s no hope for America. So, it’s a dangerous place to be.”

Don't get run over by the Welcome Wagon!

Republicans are guilty of relying too much on government too, Forest added. He noted that the recent omnibus spending bill in Congress raised America's debt, didn’t block funding to Planned Parenthood and didn’t repeal Obamacare.

Government isn’t the answer, he said.

So what is? “Before we can change government, we must change men’s hearts,” Forest said.

Send this child to camp! Does he know anything about what goes on every day in this state?

The U.S. Constitution and founding documents were crafted through a “God-ordained framework,” Forest said.

But, he argued, America‘s culture is no longer God-centric. “We need to teach character education in North Carolina,” he said.

Again with "character." Totally agree! Teach kids not to lie, not to grab each other by the pussy simply because they can get away with it, not to boast and then insult lesser human beings as stupid, ugly, fat, lying slobs, etc.

“If you want to make a huge dent in the breakdown of society, then make a dent in fatherlessness.”

Hmmm. Father figures we can respect. There's a plan!

“If you want to make a dent in all these issues, don’t make a policy, don’t get government involved,” Forest said. “Start to do something about fathers in homes.”