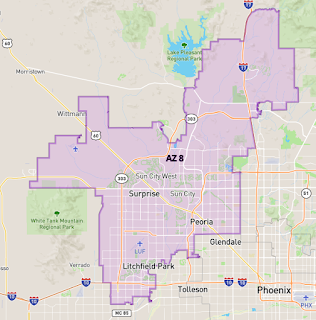 Or a hot panic.

Twitterman is cutting robocalls, warning that if the Democrat wins the special election to replace Trent Franks in the 8th Congressional District of Arizona next Tuesday, then “illegal immigrants will pour right over your border.” That kind of talk sounds like part of a comedy routine, seriously, but maybe it works in Arizona. Dunno.

The Arizona 8th takes in the suburbs to the north and west of Phoenix and a good deal of open ranching country. Republican presidential contestants carried the district by at least 20 points in all three of the last three elections. Heavily Republican -- the district includes Sun City -- and wouldn't you know it? Current absentee balloting in this special election has been lop-sidedly Republican -- 49% of requests to the Democrats' 28%, which means that the Unaffiliated are voting at a respectable clip -- 23%.

Those stats can give Republicans bragging rights -- “When you look at the number of Republicans who’ve requested absentee ballots, I don’t know how you conclude that this is a race” -- meaning, why would you even think that a Democrat could win this seat? That's what Corry Bliss said, the executive director of the Congressional Leadership Fund -- which is also incidentally pumping in hundreds of thousands to shore up the Republican candidate.

You've heard of whistling through the graveyard, right?

Some polls show the race as a "dead heat," so certainly some Republicans are worried. Why else would they stoop to the desperation of a Corporal Bonespurs robocall?

Historical note: What happened to Congressman Trent Franks: resigned in 2017 after revelation that he had offered a female staffer $5 million to carry his child. 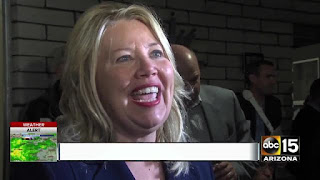 The Republican candidate, Debbie Lesko --
She was until recently an incumbent state senator, representing at least some of CD 8. She resigned her seat to run for Congress. She ran unopposed in her last election. Her greatest accomplishment in the state legislature appears to have been a law allowing Sun City residents to drive golf carts on the road. When the bill was passed, the community feted officials including Lesko with a 100-golf cart parade.

Curiously, if you go to her website, where usually a candidate will write a short autobiography -- "This is where I come from. This is what I've done. This is who I am as a human being" -- there is nothing personal about Debbie Lesko. Zero. Just a bullet-point list of service/work/activity, like you'd do if you were applying for Who's Who.

She's a doctrinaire conservative, with a distinct Tea Party aroma, and the question in this year of the Twitterman 2018 is whether that message is selling any more, even in Sun City. Especially in Sun City. Wikipedia sez, "Lesko has said she opposes universal health coverage and favors repealing the Affordable Care Act." You have a history of wanting to take away people's health insurance, at the same time that the Party in Power has repeatedly and deliberately destabilized the insurance marketplace and driven everyone's costs up, then maybe you're looking and sounding a little like very old fish wrap.

Her big issue is "build the wall." Sun City has been an enthusiastic consumer of any anti-immigrant rhetoric you cared to peddle. Those folks were Joe Arpaio's base, so how in the world would someone who opposed the wall -- as the Democratic candidate (below) does -- expect to win a race for Congress?

But because Lesko has actually lagged behind the Democrat in fundraising, outside Republican and conservative PACs have dumped a million or two into District 8 to change Lesko's persona.

Why would her persona need work? Lesko is “everything you hate about politics,” said Lesko's Democratic opponent, Hiral Tipirneni, a first-time candidate in her first-ever TV commercial. That line hurt because it's true. 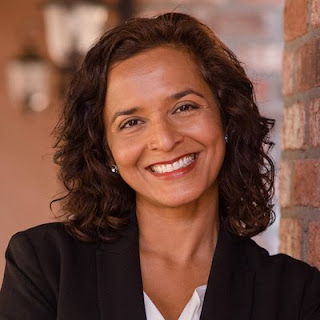 The Democrat, Hiral Tipirneni --
From her website: "Hiral came to America from India with her family at the age of three. Her parents were seeking the American dream because they knew the United States was a place where, if you worked hard and lived by the rules of democracy, you could be successful no matter where you came from."

Hiral finished public school in Ohio and went on to a medical degree from Northeast Ohio Medical University. She's spent the last 20 years as an emergency room physician. Her introductory video is another compelling presentation, in a year of great political video. You should go watch it.

According to Ballotpedia, Tipirneni outraised Lesko between February 8 and April 4, 2018, with $434,000 in contributions to Lesko's $367,000. “If you look at that national wave of momentum, Arizona is no different,” Tipirneni told the Guardian. “Our Democratic base is energized. And what’s amazing is that we didn’t realize how many Dems were there just waiting for somebody to step up and represent them.” She acknowledges that Democrats alone can't elect her. She'll have to win Republican votes. How many Republican votes she needs depends on how those Unaffiliateds are voting.

Tipirneni is running on health care and saving Social Security, Medicare and Medicaid, programs that Tipirneni points out the Republicans want to slash to pay for the deficit that was created by the tax cuts. She advocates a plan that would allow anyone, of any age, to buy into Medicare, the most sensible fix and the one that gives conservatives the ultimate vapors.

She's against The Wall. That may kill her in Sun City -- probably will -- but it's otherwise a clear contest and a choice in the Arizona Eighth: An Immigrant v. an Immigrant Basher. If Tipirneni even comes close, it proves the sponginess of Republican enthusiasm this year.