Trump Is Going to Texas, But Will He Learn Anything? 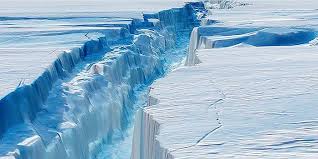 1. Scientists have been warning that climate change will produce more "rain bombs," catastrophic amounts of rainfall in short time-spans. Storms will get more severe. More rain will fall, and faster.

3. Warmer water also increases in volume. Warmer oceans are rising, without even factoring in the melting of glaciers and the disintegration of the Larsen C Ice Shelf in Antarctica. Coastal flooding in some areas is already a constant fact of life, even without hurricanes.

4. It's damn near impossible to get flood insurance for homes from private insurers. The US government stepped up, creating the National Flood Insurance Program (NFIP) to provide insurance to homeowners in areas prone to flooding. From 1978 to 2004, NFIP generally took in more in payments than it paid out in losses. But in 2005, Katrina hit. The NFIP was on the hook for $18 billion — an amount equal to all of the premiums paid into the program from 1991 through 2005. Then, in 2012, Sandy hit. Losses neared $10 billion.

5. Shoring up NFIP became a big political fight in Congress after Hurricane Sandy. Some 67 Republicans in Congress, including Speaker Paul Ryan and 5th District Madam Virginia Foxx, voted against a NFIP funding bill in January 2013. Screw those Northeastern Democrats!

7. The NFIP is underwater because it doesn't charge enough in flood insurance premiums to cover the costs of recovery. Rich people with expensive ocean-front properties don't want to pay more, and they have considerably more political influence over Congress. Funding for NFIP is basically a political football.

8. Then comes Hurricane Harvey, followed by a rubber-necking Trump who understands little, cares even less, and seems perfectly immune from deep knowledge. We know where he stands on science.

Trump has pledged 1 million dollars to disaster relief in Houston.

What have YOU done?

I'm sure Houston appreciates that.

Not impressed by Donald! He has a well known history of pledging big sums for charity and then not delivering, except for the times he got publicly shamed into doing what he promised. http://www.nola.com/politics/index.ssf/2016/06/trump_charity_what_he_gave.html

Just as we suspected! Trump is now backing out of his $1 million donation: http://www.rawstory.com/2017/09/donald-trump-cant-donate-1-million-from-his-foundation-to-houston-because-its-under-investigation/