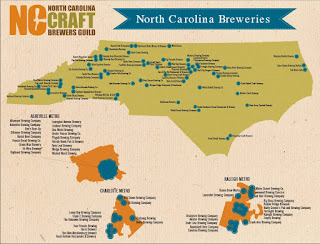 This will be an issue in the 2018 General Assembly elections. Or it should be.

The NC Beer and Wine Wholesalers is a powerful lobby in Raleigh. They represent the big national brewers, the swill-makers that are most threatened by the growth of small, local "craft" brewers like Olde Mecklenburg brewery in Charlotte. Potentially like Appalachian Mountain Brewery and Lost Province Brewery in Boone, if they wanted to grow and get state-wide distribution.

The NC Beer and Wine Wholesalers control distribution, and their big industry members have no interest in helping small local businesses sell their product. So an attempt to change the ABC laws in North Carolina this year met a stone wall manned by Republican members of the General Assembly who were receiving, collectively, some $90,000 in campaign contributions from the NC Beer and Wine Wholesalers PAC.

Call it "campaign contributions" if you like. I call it bribes.

The recipients of this large money did what the wholesalers wanted: they stripped a provision from the ABC omnibus bill that would have raised the legal cap on how much beer local craft breweries can "self-distribute" and thus stay out of the iron grip of the distribution monopoly maintained by the Beer and Wine Wholesalers.

Give these criminals enough money from the bottled water industry and they'll make wells against the law. Even the Democrats of the eighties and nineties weren't this brazen.