And Then You Destroy Yourself 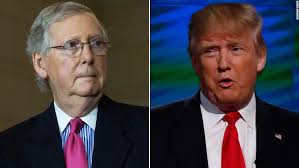 Mitch McConnell has reportedly had it with Trump. He's now openly speculating that Trump won't be president for long.

According to Burns and Martin, "Angry phone calls and private badmouthing have devolved into open conflict, with the president threatening to oppose Republican senators who cross him, and Mr. McConnell mobilizing to their defense."

"In a series of tweets this month, Mr. Trump criticized Mr. McConnell publicly, and berated him in a phone call that quickly devolved into a profane shouting match."

What came next out of Trump's mouth, according to White House leakers, might be of interest to Robert Mueller. (Rachel Maddow highlighted it last night on her show.) "[Trump] was even more animated about what he intimated was the Senate leader’s refusal to protect him from investigations of Russian interference in the 2016 election."

Some people think that line of argument, directed at the Senate Leader, might be part of a pattern of obstruction of justice.

Last night, Trump upped his ante against McConnell. He badmouthed both Republican Arizona senators while standing on a stage in Phoenix. "Take that, Turtle Boy!"

Also last night in Phoenix, Trump found a new way to threaten McConnell. He said he "might" -- which means he just that second thought of it -- might shut down the government over funding for his border wall.

Which drew this response from Republican Judd Gregg of New Hampshire: If Mr. Trump “can’t participate constructively,” the House and Senate will have to govern on their own -- “Failure to do things like keeping the government open and passing a tax bill is the functional equivalent of playing Russian roulette with all the chambers loaded,” Sen. Gregg quipped.

Al Hoffman, a former finance chairman of the Republican National Committee, said of Trump, “I think he’s going to blow up, self-implode.”