Happened a couple of weeks ago, but news is just now emerging: 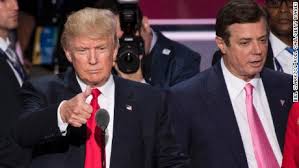 FBI agents raided the Alexandria home of President Trump’s former campaign chairman late last month, using a search warrant to seize documents and other materials, according to people familiar with the special counsel investigation into Russian meddling in the 2016 election.

Federal agents appeared at Paul Manafort’s home without advance warning in the predawn hours of July 26, the day after he met voluntarily with the staff for the Senate Intelligence Committee....

...The search warrant indicates investigators may have argued to a federal judge they had reason to believe Manafort could not be trusted to turn over all records in response to a grand jury subpoena.