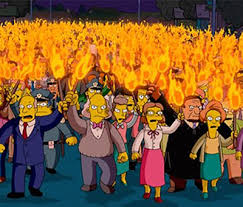 Last night at his triumphalist rally in West Virginia, Trump opened up a new counter-strike against the Mueller investigation;

We well know that some 60 percent of West Virginia is part of the 36 percent of the American voters who still support Trump, so that rallying cry -- "they're trying to cheat you out of the leadership you want" -- is calculated to get the cheers that Trump craves in a state where the majority still support him. He needs constant flattery to feel validated, and he doesn't travel anywhere that validation isn't guaranteed.

But that line also suggests that he's perfectly willing to stir up the mob to defend him. How far is he willing to go? God only knows, but we'll find out.

Because the Mueller noose is tightening. He's empaneled his own grand jury in the District of Columbia, and he's apparently deep into Trump's tangled finances. Furthermore, the Republicans in the Senate at least -- who all have to run state-wide and not in gerrymandered safe havens -- are clearly done with his shenanigans. They are not adjourning the Senate during August so that Trump can't do any "recess appointments." Ouch. That's a direct slap at the leader of their party.

Two different bipartisan pairs of senators have drafted two separate pieces of legislation to prevent Trump from premptorily firing Robert Mueller. One of those bipartisan pairs includes an unlikely senator -- Thom Tillis of North Carolina, who hasn't heretofore shown much of a pulse. Both versions of a Stop Trump From Firing Mueller Act of 2017 would end the executive branch’s ability to fire a special counsel, by putting the question to a three-judge panel from the federal courts. Ouch again. That Tillis is willing to raise his hand in this manner against Trump suggests that he no longer fears retaliation.

Trump's mob actions notwithstanding, it appears that Republican senators intend to see the Mueller investigation through to its end, whatever that may entail. I think they'd probably prefer to have Mike Pence in the Oval Office. Maybe all of us would. Or maybe it isn't even a matter of preference but a matter of the life or death of our republic.

Tillis is facing re-election in 2018 and even he realizes that following down the line with an unpopular and potentially indictable president might not be the best course. BTW who will the Dems put up against him? Jerry is your ear to the ground on this? It's time we heard, so he/she can start raising the million$ it will take--we know the Popeites are already readying their knives and using some of their tax cut monies to take out after him/her.

Tillis probably realizes (unlike Brother Doc) that he won't stand for reelection until 2020.