Congrats, America! You Withdrew from the Paris Climate Accords, and Here's Your Reward 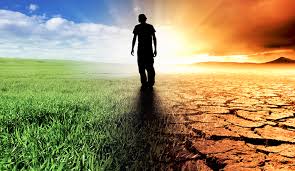 Unprecedented droughts. Worse and worser heat waves. Rain "bombs" and fiercer storms slashing the landscape. The average temperature in the United States "has risen rapidly and drastically since 1980, and recent decades have been the warmest of the past 1,500 years," according to a comprehensive climate report paid for, researched, and written by the U.S. government -- "Climate Science Special Report."

That report was just leaked to the NYTimes because some of the scientists involved in its writing are fearful that the current administration with suppress it. Or "edit" it for content to please the Koch Bros.

With no interest in science at the highest levels of our leadership, and with no chance of changing that head-in-the-sand status quo for the foreseeable future, we are so thoroughly f***ed. To paraphrase the coroner in "The Wizard of Oz," we're not only merely f***ed. We're really most sincerely f***ed.