Did You Get the Jonathan Jordan Mailer? 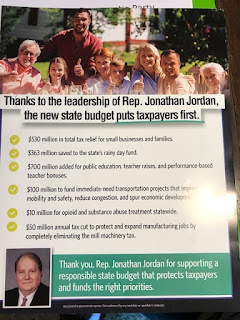 "Paid for by Carolina Leadership Coalition," a 501(c)(4), which means that the source(s) for its two reported contributions of $75,000 and $10,000 are secret and known only to the treasurer (Vic Edwards, see below) and undoubtedly to Jonathan Jordan.

According to this mailer, Jonathan Jordan was the big-hearted Daddy Warbucks in voting for an incredibly generous and beneficent state budget which has made teachers rich beyond their wildest dreams and fattened the wallets of every "little person" in the state.

Let's get real. The budget that Republicans passed over Governor Cooper's veto in January is more of the "austerity" boilerplate those guys have banged out since 2013. It does not keep up with inflation. It does not account for increasing population. Tax cuts? Yeah, if you're already rich: "The top 1 percent of income earners in the state (whose average income is $1 million) gets a permanent tax cut of nearly $22,000 on average. By contrast, middle-income taxpayers get a tax cut of $226 on average, while the lowest income earners in the state get a tax cut of only $16 on average" (Budget and Tax Center).

By the way, that photo of happy folks sending a cheery thumbs-up to Rep. Jordan for his sterling "leadership" at the top of the flyer ... that's Stock Photo 693807481, "leisure, holidays and people concept - happy family having festive dinner or summer garden party and showing thumbs up." Fits perfectly with the rest of this transparent fakery.

Now back to the 501(c)(4) that paid for this piece of smelly cheese. The Carolina Leadership Coalition registered with the State Board of Elections back last October and has recorded two contributions (no names attached) totaling $85,000. The treasurer for the "Coalition" is one D. Victor Edwards, a self-employed CPA in Raleigh, who was possibly chosen as the sole public face of this shadowy political fund because he's a tax consultant and doesn't otherwise have any discernible political history or involvement.

But we know you now, Vic.

Posted by J.W. Williamson at 8/31/2017 09:31:00 AM
Email ThisBlogThis!Share to TwitterShare to FacebookShare to Pinterest
Labels: Jonathan Jordan, North Carolina budget

Is this the same organization?

Larry Yarborough/NC-2 has the same mailer coming out.
I wanted to alert folks over here to what you have compiled, but Facebook has thrown you into purgatory and will not let me share your post nor include your link in my post.
https://www.facebook.com/PersonDems/